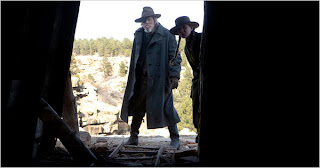 You may want to read True Grit before you head to theaters to see the new film. The New York Times’ Manohla Dargis writes that the Coen Brothers “have been surprisingly faithful to the tone and idiomatic tang of Mr. Portis’s novel, perhaps because its worldview suits their ironic purposes.”

Recognizing their strong material, “twisty, funny sentences have been plucked by the filmmakers right from the novel.” She also says that Hailee Steinfeld, the girl who plays the lead role, is “terrific,” while Jeff Bridges is at his scene-stealing best.

Read it at The New York Times
Posted by Beattie's Book Blog at 6:26 am