Digital publisher Enhanced Editions has launched its first e-book app with AudioGO, with a percentage of sales going to charity. 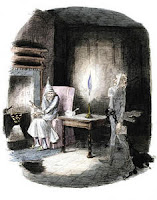 Charles Dickens’ A Christmas Carol will be read by actress Miriam Margoyles as unabridged audio; it is the first time audio has been sychronised to the full text of the novel, according to the publisher.

Margoyles said: "Anything which gets people back to books is thrilling; this uses modern technology in an exciting new way. Dickens would have approved. Bring it (and me) on!"

The app is available from the app store from today priced £1.79. For a week from Christmas Day, 20% of sales will go to The Charles Dickens Museum in London.

Enhanced Editions announced its partnership with AudioGO last month.
Posted by Beattie's Book Blog at 6:38 am