by Paolo Bacigalupi
Orbit - RRP $27.99
This book has created something of a storm being one of Time Magazine’s top 10 novels for 2010 and having won an extraordinary four of 2010’s major international SF awards: the Hugo, Nebula, Locus and John W. Campbell Memorial Awards. 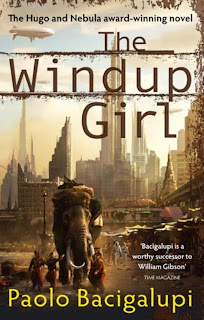 I have not read it but am impressed with both the acclaim with which it has been received by  speculative fiction and science fiction enthusiasts around the world, and with the superb cover treatment.
Here is the cover blurb:
In Thailand, Anderson Lake is a calorie company man working for big business. Under cover as a factory manager, he combs Bangkok's street markets in search of near-extinct foodstuffs. And there he meets the Windup Girl, the beautiful and enigmatic Emiko – now abandoned to the streets. She is one of the underclass of New People, creche-grown and bred to suit the whims of the rich. Engineered as slaves, soldiers and toys, they are seen as soulless by some and as devils by others.

As Lake becomes more drawn to Emiko, conspiracies breed within his working life and the politics of a troubled age threaten to spiral out of control. The pressures mount as what he should do conflicts with what he wants to do, threatening to bring down his world. So what happens when bio-terrorism becomes a tool for corporate profits? And could bio-terrorism's genetic drift force mankind to the cusp of post-human evolution?

About the author:
Paolo Bacigalupi is a multiple award-winning author and this latest speculative fiction novel is one of the most acclaimed novels in this area to appear in recent years. He also writes award-winning short stories in addition to novel length fiction. Paolo currently lives in Western Colorado with his wife and son.

Paolo Bacigalupi is being hailed as one of the most visionary authors writing in the field of science fiction and speculative fiction and critics are favourably placing his work with some of the most prominent writers of today including William Gibson, Cordwainer Smith, Phillip K. Dick and Margaret Atwood.

So those of you with a penchant for speculative fiction or science fiction should check this one out. All the overseas reviews I have seen have been uniformly enthusiastic.
Posted by Beattie's Book Blog at 12:26 pm

Graham, I have read this book earlier this year, while reading the nominees for this year's Hugo Award and thought that it was "one out of the box." Definitly one of my top reads for 2010.

Thanks for the heads up..I have not heard of this book. It sounds like an intriguing read.