E-books worth 5% of Hachette's business

E-books accounted for 5% of Hachette's total sales in the fourth quarter of this year, the publisher's c.e.o. has said. 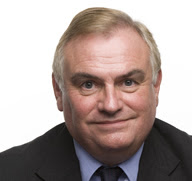 In a letter to authors dominated by digital issues, Tim Hely Hutchinson (left) said e-books were now a "significant" part of Hachette's business. He said in the United States, e-book sales had been tripling year on year, from 1% of total sales in 2008 to 9% this year. He said: "Our market in Britain and the Commonwealth is not far behind and, actually, I would not be surprised if the British and Australian markets were to end up with a higher percentage of ebook sales than that of the USA."

Earlier this year, Hachette became the first publisher to implement agency pricing in the UK. Hely-Hutchinson said: "As we are setting prices that are reasonable, I am confident that most people who understand the industry will see that it is the fairest method of pricing, in order to ensure that authors are properly remunerated and retailers can compete on the service they offer, rather than just on the level of discounting they can afford."

He said Google's planned move into e-books next year "might be another game-changer" although added: "Google has not, to put it mildly, always been a favourite of those of us who live by copyright, and any agreements we make with Google will be negotiated with great care, protecting your and our mutual interests."

Hachette UK made "major" investments this year in order to respond to digital change, said Hely-Hutchinson. These included Biblio3, an operating system for managing print and digital books from pre-acquisition to publication, a digital asset management system to store and distribute all digital files and a new web system for internal and author websites.

Hely-Hutchinson was gloomier about the state of bookselling, with the market down 3.2% year on year. He said: "The competition for market share is ferocious, particularly at this time of year: price promotion is now so ingrained that consumers expect to be able to buy their books at heavily discounted prices...It means the market continues to be dominated by a small number of bestsellers and the battle to get attention for backlist and pretty much any book that is not an obvious potential bestseller requires more ingenuity than ever. Moreover, a continuing price war would mean more booksellers closing over time."

Despite this, he described 2010 as a year of "exceptional achievement" for the publishing house. He said the group published 154 Sunday Times top 10 bestsellers, 33 of which were number ones.
Posted by Beattie's Book Blog at 7:09 am