One of New Zealand's oldest independent bookstores has changed hands after more than 30 years. Founded by Jennifer and Tim Eddington, Pathfinder Bookshop now has a new owner in Trisha Martin, a business consultant and part time body work healer. 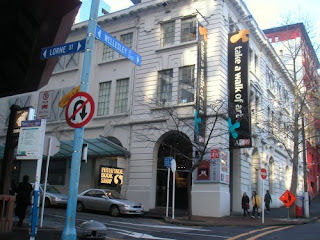 Following many years of publishing and book retail experience in Canada and the UK, the Eddingtons moved to NZ in early 1981 with a young family and set up shop in central Auckland in a tiny space at the High Street end of what was then called Century Arcade. A branch in Takapuna followed but that was then moved to Wellington in 1985 and ten years later sold to Colin and Laurel Chiles who renamed it Pinnacle Books. and it continues trading to this day.

Meanwhile the Auckland shop moved to a much larger space in the Old Customhouse in 1986, followed by an even more successful move to The New Gallery building, opposite the Auckland Public Library fifteen years ago. Sharing the lower portion of the building with art book specialist Parsons provided an nice synergy.
Pathfinder described their personal improvement self help specialist range as books for Inner Development and Wellbeing, the popular current term for which is Mind Body Spirit.

Actors and singers, notable sports people as well as business leaders are some of the customers who have availed themselves of the world class selection of titles and the dedicated service that Pathfinder has provided over the years. Long may it continue.
Posted by Beattie's Book Blog at 3:00 pm