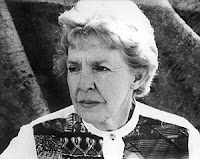 New Zealand-born Park, who lived mainly in Sydney after moving to Australia in 1942 to work in journalism, made a splash on the literary scene in 1948 with the publication of The Harp in the South.

That book was set among the slums of the then poor Sydney suburb of Surry Hills, where Park lived with her husband D'Arcy Niland, also an author who is best known for The Shiralee. They had five children.

Park followed up that success with another novel about life during the Depression, Poor Man's Orange. She won the Miles Franklin Award in 1977 for Crowns and Kings and Swords .

She was also a successful children's book author, with her most cherished creation being The Muddleheaded Wombat. She also wrote Playing Beattie Bow.

Peter Pierce, editor of the Cambridge History of Australian Literature, said: "She can properly be regarded as a child of the Depression and a marvellous chronicler of that time.

"She was a prolific writer, from the social realism of her novels to the children's books. She was one of those remarkable New Zealanders who made a life and career here.''
Posted by Beattie's Book Blog at 8:25 pm