Wine: Read all about it

Quench your thirst for wine knowledge from expert writers passionate about their topic.
By Jo Burzynska, Herald on Sunday Dec 19, 2010

As the Christmas break beckons, I'm looking forward to having the time to indulge in one of my favourite pursuits, relaxing with a glass of wine and a good book. If this sounds like you, or anyone on your Christmas list, the season offers rich pickings in some of the great recently published wine titles that do what good wine books should do - put wines in context and offer engagingly delivered insights into the forces that shape them.

"If wine is a casual beverage for you then the discussion ends," warns American boutique wine importer Terry Theise in Reading Between The Wines ($55, University of California Press). His heartfelt treatise on why wine matters is certainly a book for those who share his passion and will consequently be interested by this exploration of his often mystical relationship with wine.

Theise may not be well known over here, but his observations are relevant to anyone appreciative of a sense of place in the wines they choose to drink. In this sensitive and articulate account, Theise expounds on the magic of good wine: as a conveyor of beauty, whose subtleties and complexities provoke sensual, emotional and intellectual responses, and are entities inextricably linked to where they're from. He also touches on his own most valued wine places, grapes, winegrowers and wines.

Unsurprisingly, Theise is a strong advocate of artisan winegrowers, who have a connection to their land, which he feels connects us as wine drinkers "to something we know is true, important and worth defending and preserving". 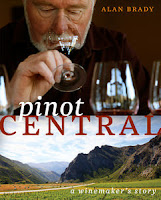 Alan Brady would fall into this category. In Pinot Central: A winemaker's story ($67, Penguin), he tells the pioneering tale of how he established one of Central Otago's first commercial vineyards back in the early 80s.

In this very personal and personable account, Brady recounts how acquiring a dilapidated stone cottage on some land in Gibbston, as a getaway from his work as a city-based television news producer, gradually turned into a full-time commercial vineyard project in an era when growing grapes in Central Otago was considered a folly.

"After all the research and enquiries and negative advice from various 'experts', we decided there was only one way to find out if grapes would grow and ripen in our conditions, and that was to plant some vines," Brady recalls.

His gut feeling paid off and helped found the region's now internationally respected wine industry, whose early days he brings to life, along with the trials of being a green winegrower in viticultural terra incognita. 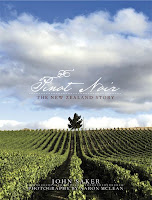 Central's great grape is the theme of John Saker's Pinot Noir - The New Zealand Story ($49.99, Random House). Written in a style that matches the sensuality of its subject matter, this well-researched and visually rich book charts the progress of this "most site-centric of grapes" through the years and the vineyards of our country.
While New Zealand's pinot noir boom is a product of the last decade, Saker investigates its somewhat elusive past in our vineyards and its first appearances in the late 1800s. He goes on to follow the fortunes of this moody and mysterious variety through the fledgling examples of the 70s that heralded its modern era, before taking stock of the country's current vibrant pinot scene and profiling its key regions and makers.

"Pinot people have great stories and tend to tell them with passion," says Saker in his introduction. He's certainly teased out some great tales, which along with its bounty of information, should make this book a bible for lovers of our local examples.
Posted by Beattie's Book Blog at 6:44 am