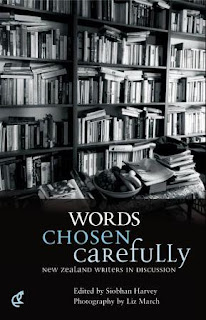 Way back in 1975 when I was a Napier bookseller William Collins NZ, (as they were then known), published a most beautiful, special book, Eagle's Trees and Shrubs of New Zealand in Colour. Two Hundred and Twenty-Eight Botanical Paintings by Audrey Eagle

It was a stunning book and it cost what in those days was an unheard of price - $50. We launched the book in Napier where we had a display, on loan from the publishers some of Audrey’s exquisite original art. I remember Audrey arrived from the Waikato by bus. Beattie & Forbes Bookshop gained much kudos for launching such a prestigious title.

The book had previously been launched in Auckland and Hamilton but back then in pre-computer days, before e-mail and mobile phones no one knew that apart from the publisher, author and ourselves.

I mentioned this Napier event last evening at the launch of Words Chosen Carefully because we were launching another prestigious work, this time in the literary world than the botanic world, and like that earlier work this title was also the subject of multiple launches – it was launched at the quite marvellous Going West Festival the weekend before last, then a few days later it was launched again, this time by Gordon McLauchlan at Dymocks in Ponsonby and tonight it is my turn to launch it again.

Personally I believe the more launches a book has the better, there cannot be too many. So I suggested to publisher Chris Cole-Catley and editor Siobhan Harvey that they might look at heading off on a road show around the country launching this very special book in every town and hamlet.

Several things made me describe this book as special – first just look at the line-up of authors being interviewed - a great blend of mid-career and senior writers all of whom have enjoyed critical acclaim for their work.

Then you look at the interviewers – another wonderful blend of senior journalists, reviewers and broadcasters, some of them of course published authors themselves. And Siobhan Harvey has made such a wonderful job of matching them up so that the resulting interviews maximised the opportunities presented. I also admire the way she honoured the interviewers each with an original photograph and also biographical notes at the end of the book.

That brings me to the photographs – a terrific selection of original shots of our authors and their interviewers. It would have been easier, and cheaper, to use existing file photos but no outstanding photographer Liz March from West Auckland, who has held many solo and group shows, was commissioned to photograph them all and they make a great selection in their own right.

Then of course you have the excellent, thoughtful introduction by the book’s editor Siobhan Harvey, published poet, short story writer and literary editor. I advise all who buy the book to start by reading her introduction where she talks about the selection of authors process, of the many she had to omit for reasons of commercial necessity, (actually as an aside this may lead to a second in the series in a year or two – that is my secret wish anyway), she also talks of the need to record our literary cultural heritage and much more. I also suggest you only read one interview at a time, soak it up, then a couple of days later read another. This way the book will take a month to read and you will gain much more pleasure from it than racing through reading interviews as you might if you were reading a novel.

My final reason for calling this a special book is of course the collection of interviews themselves where the selected writers talk openly and frankly on how and why they write and how they draw on their own lives and experiences. They examine the place of land, culture, belonging, society, family, literature and art in their work. The interviews also provide enormously valuable tips, advice and encouragement to other writers and budding writers.

All who enjoy reading New Zealand writers should own this outstanding book, it is a fine piece of publishing, and a wonderful addition to our literary history. There should also be multiple copies in every library in the land.

This book launch was held at the Takapuna Public Library, organised by the Friends of the Library, and the event was chaired by Library Manager Helen Woodhouse. I must pay a warm tribute to Helen, one of the great NZ book people, who must have overseen more book launches than anyone else I know in her long career with the North Shore Libraries.

Those taking part include: