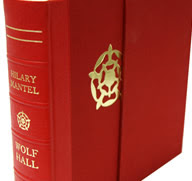 Meryl Halls, head of membership services at the Booksellers Association, said: "We are delighted at two such fantastic winners for our Independent Booksellers Book Prize, especially as we know how committed independent booksellers are to both these authors.

"The IBW Book Prize is a key part of Independent Booksellers Week and now, in its fourth year, continues to demonstrate the value of the strong and precious link between independent booksellers and the authors whose works they love and sell."

The winning titles were chosen from a shortlist of 10 adult and 12 children's books, which were showcased in promotions throughout IBW (14th-21st June). The winners were voted for by independent bookshop customers.

Mantel beat the likes of One Day by David Nicholls (Hodder) and The Music Room by William Fiennes, whereas Morpurgo was more popular than titles by Robert Muchamore and Andy Stanton.
Posted by Beattie's Book Blog at 5:24 am