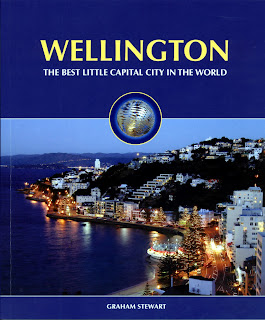 Wellington: The Best Little Capital City in the World
I wrote about this appealing book a couple of weeks back. Now it has been officially launched and the photo shows the author/photographer Graham Stewart, right, with deputy mayor of Wellington, Ian McKinnon, and Mayor Kerry Prendergast.

Writing about Stewart's latest title Paul Smith wrote:
For this book he was up in choppers or planting his tripod at twilight to take shots of Wellington - it’s what he’s done, always done.

The difference is, he’s 78 and shouldn’t really be leaning out of helicopters, restrained not by a harness, but by a seat belt. One way or another, Stewart has been doing this for the better part of 60 years, working on dailies like the New Zealand Herald and the late lamented Weekly News.

“I’m not one who goes out and plays bowls and I’ve never been a golfer, so I guess I had to put my energy into something” he says,
“I’m probably coming to the end of this particular road” he adds - and in the next breath says he has just published two commissioned books to join other 17 he has authored. What brought him out – and above the streets of Wellington - was his latest pictorial history, Wellington the Best Little Capital City In The world.

Before its makeover, the capital was arguably the best little frump in the country, a necessity for those making their pilgrimages to power. But then things changed. For years, it has been a cultural and artistic hub, its man-made aesthetics far outshining Auckland’s. All of this is captured in Stewart’s book which incorporates a mix of historic and modern photos so readers can easily assess the extent of the city’s transformation.

But before being bewitched by what looks almost like a Riviera waterfront, it’s worth remembering that apart from night shots, most were taken in glorious sunlight. What’s left unspoken is Wellington’s notorious weather.

For all of that though the city emerges through this pictorial reflection as a people-friendly place and one sprinkled with uplifting sculptures and artwork.

Wellington, The Best Little Capital In The World, by Graham Stewart, published by Grantham House, $24.95 GST inclusive, was released on September 21.

This is what another reviewer had to say in The Domnion Post:
Dear Wellington…
Publisher and photographer Graham Stewart’s latest book, Wellington: The Best Little Capital City in the World, is a love letter to the city he has been romancing most of his life.
Auckland-born Stewart, 78, spent nearly nine months photographing his adopted home town from almost every angle, even the air.

He matches historic photographs from the Alexander Turnbull Library, private collections and his own vast archives of old pictures – even some that he took himself in the 1950s and 1960s – with their modern-day locations, showing how Wellington’s architecture, geography, transport and fashion have changed over the decades.

Stewart loves how the city has “reincarnated” itself since he went to live there in the 1970s. “Xnumber of years ago, people would say, ‘Why do you want to live in Wellington?’ Now there’s been a culture and attitude change.”

During the 1950s, Stewart worked as a photographer for the New Zealand Herald, before turning to publishing, and would spend about a month in Wellington each year.
He took street scenes, which appear in the book and show his fascination with trams, boats and buses. The harbour and the comings and goings of ships, ferries and yachts form a big part of the book, as does the way Wellington has embraced street sculpture.

He says the works that line Evans Bay Parade, including Phil Dadson’s Akau Tangi and Phil Price’s Zephyrometer, are really special. “I just fell in love with them.”
Posted by Beattie's Book Blog at 2:58 pm