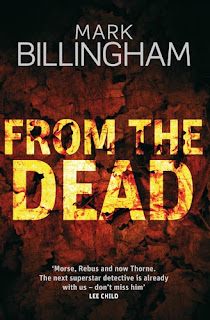 Crime fiction is one of fiction’s biggest selling genres but I find it one of the hardest categories to review because essentially they are whodunits and you can’t say too much about the plot without giving away the finale. In fact a couple of times recently I have been criticised for giving away too much of the story when reviewing on this blog.

So let’s start by saying this is the 9th novel from Mark Billingham featuring his likekable but quite complex cop, Detective Inspector Tom Thorne. Almost all crime fiction writers have a good guy protagonist, usually but not always a cop, usually but not always a man, and devotees of crime fiction tend to relate strongly to these characters. A few of my favourites that spring to mind are Ian Rankin’s John Rebus, PD James’ Adam Dalgleish, Sarah Paretsky’s VI Warshawski, Sue Grafton’s Kinsey Millhone, Lee Child’s Jack Reacher, Michael Connelly’s Harry Bosch and Patricia Cornwell’s Kay Scarpetta. I know and like these people, (most of the time anyway!), and read everything published that features them. I like the continuity that characters like this provide, I guess it goes back to my reading as a child, all those books by Enid Blyton, - the Famous Five, the Secret Seven and other series too like the Just William stories, Biggles, and Arthur Ransome’s Swallows and Amazon series.

Some authors within the genre write only stand alone novels. One who comes to mind is English author R.J.Ellory who was in New Zealand recently. He creates a new protagonist for each title. I would like to have seen NYPD detective Frank Parrish, his main character in his latest excellent novel, Saints of New York, developed in future titles but when I asked him about this he said that would not happen.

Back to Tom Thorne, he is a serious and dedicated cop, slightly unpredictable with a dry sense of humour, he and his long time girlfriend Louise live in London but each with their own flat although much of the time they are together at one address or the other. In this latest book their relationship is going through something of a difficult patch. They are both cops and so their personal; lives and plans are often disrupted by police call outs.

So what does he get up to in this latest adventure? Well here is the story in a nutshell. A decade ago Alana Langford was murdered in what was dubbed at the time the Epping Forest Barbeque because his charred remains were discovered in his burnt out Jag deep in that forest. His wife Donna was found guilty of conspiracy to murder her husband and was sent to jail for ten years. It was a pretty cut and dried case, Donna had paid a guy 25,000 pounds to carry out the deed.
But just before she is due to be released from prison she received a nasty shock when anonymous letters start arriving containing photographs of her husband alive and well and enjoying e trappings of an apparent Mediterranean lifestyle. Who was it then who was burnt in the Jag, certainly it was not the man she had paid to be murdered? Enter Tom Thorne. And really the book is about his attempts to solve that mystery about which I will say no more except that Thorne, whose beat is normally London finds himself on the Malaga coast of Spain working on what appears to be an unsolvable case. It is gripping stuff, moves along at a real clip and so captured was I that I read it in three long sittings over the last couple of days.

Mark Billingham is one of the UK’s leading crime writers – he has won the Theakston’s Old Peculiar Crime Novel of the Year Award twice, the Sherlock Award and has been nominated several times for the Crime Writers Association Gold Daggers, He’s good and if you enjoy crime fiction then read this.
If you don’t know his books you can read the first chapter of each one at his website – http://www.markbillingham.com/

I reviewed this title with Kathryn Ryan on Radio New Zealand this morning, this is a somewhat longer review than I had time for on air. http://www.radionz.co.nz/national/programmes/ninetonoon
Posted by Beattie's Book Blog at 12:30 pm