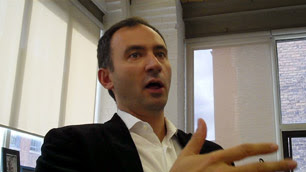 Kobo CEO Michael Serbinis says it makes sense for authors and publishers to release books in digital form to see if they sell before printing them. (CBC)A decade ago, in the early days of digital music, a battle over who would control the market never really happened.
The technology and business model were too new and unproven so many potential players stayed away, thereby paving the way for one company — Apple — to step in and capture the market.

Today, there is a fierce fight going on for the burgeoning and quickly growing e-book market. Determined not to let one company — Amazon this time — run away with it, a number of players have stepped forward to duke it out.

Among the players is Kobo, a joint venture between a number of companies around the world and led by Toronto-based Indigo Books & Music. The Canadian company owns 58 per cent of Kobo, with the remainder split between a number of firms including U.S. book chain Borders, Australia's Red Group and Hong Kong-based Cheung Kong Holdings.

In May, Kobo launched its own e-reader, which works in conjunction with an online bookstore, with the aim of going toe to toe with the likes of Amazon and Apple.

CBC News: Early this year, you predicted e-readers would get down to $100 by the end of the year. With the Kobo now $129 US in the U.S., we're almost there. Is it happening faster than you thought?
Michael Serbinis: It's on schedule. There are already e-readers that are kissing the $99 point or already there. We're getting there.

CBC News: Many have predicted that multi-use devices such as the iPad will make single-use e-ink readers obsolete. That's not the case when the price gets that low, right?
Serbinis: Right, and when you're focused on reading, having CNBC ping at me or having some other notification happen in the background doesn't exactly make for a relaxing environment. There are a lot of customers who prefer to have a dedicated reading experience, not only for price point but because it's dedicated and they can relax and escape by getting into a good read.

Read the full interview at CBC.
Posted by Beattie's Book Blog at 6:36 am