Cat in the Hat turns town into Seussville

Star-bellied Sneetches will come tumbling down, through the streets of Woodville – that wonderful town.
There'll be cats wearing hats and strange-looking eggs, a Grinch stealing Christmas and pyjamas with legs.

More than 80 artworks from Theodor Seuss Geisel, better known as Dr Seuss, will be on display in Woodville from next week – the first time they've been seen in a rural New Zealand town.
So precious are the illustrations in the The Art of Dr Seuss that the New Zealand caretaker, Ron Epskamp, will sleep at Woodville's Artmosphere gallery during the two weeks the exhibition is running.


The 70-year retrospective features more than 80 limited-edition works, curated from public and private collections across the United States.
It includes 40 well-known Seuss illustrations from his more than 40 classic children's books, 10 "unorthodox taxidermy" sculptures and 30 painted works.
Many of the paintings were not seen before Seuss' death in 1991, and have been dubbed his "secret art". He would begin work on these paintings when he arrived home in the evenings, and keep at the brushstrokes until late at night.
His widow, Audrey Giesel, has given permission for the exhibition to run in New Zealand.
When The Art of Dr Seuss was curated in 1995, she wrote: "I remember telling Ted there would be a day when his paintings would be seen and he would thus share with his fans another facet of himself – his private self. That day has come. I am glad."
The full story at www.stuff.co.nz/manawatu-standard/news/4167793/Cat-in-the-Hat-turns-town-into-Seussville 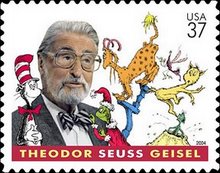 The Bookman had the great pleasure of spending a few days with Ted Geisel (Dr.Seuss) and his wife Audrey back in the 1970's when they visited New Zealand. We went trout fishing on Lake Taupo, Ted landed one and the hotel made a special dish for us that night, Trout a la Suess. Then in Wellington I did a series of five five minute interviews with Dr.Seuss for TV One's Today at One programme on which I used to review children's books.
They were both delightful company.
Posted by Beattie's Book Blog at 11:43 am