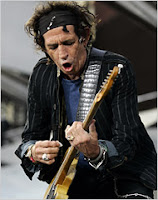 Memoirs by popular polymath Stephen Fry and rock legend Keith Richards could be filling festive stockings this year with both titles predicted as the best Christmas sellers.
Six retailers and wholesalers were polled by The Bookseller last week to predict 2010’s Christmas hits—Fry and Richards topped the poll with four votes each. After a disappointing Christmas 2009, retailers hailed a diverse list of publishing and a better spaced release schedule as aiding promotions this year.

Fry’s and Richards’ ­memoirs have been eagerly anticipated—the Rolling Stone has never before told his story and Fry’s first memoir, Moab is my Washpot, was published in 1997.

Jon Howells, Waterstone’s spokesman, called Richards’ memoir possibly the coolest book of the season. “Fry’s status as national treasure is rock solid, it’s hard to find anyone who doesn’t like him,” he added.

Nelson Mandela’s Conversations with Myself (Macmillan) caught people’s attention, picking up two votes as did Freedom by Jonathan Franzen (Fourth Estate). Howells called Franzen’s title the most talked about novel in years. He said: “This book puts Franzen up there with the American literary greats, but has the potential to sell like a summer blockbuster.

“It’s a really strong fiction year. Last year there was the tendency towards the more literary, something which was good for us but doesn’t necessarily equate to great sales. This year there are some fine literary books but there’s also the likes of Dawn French, Jilly Cooper’s first in years, the ­latest Martina Cole, Jed Rubenfeld and Sophie ­Kinsella.”

Amy Worth, head of books buying at Amazon.co.uk, said: “There is a lot of great non-fiction out this Christmas. Cookery books are particularly well represented with offerings from Jamie Oliver, Nigella Lawson and the Hairy Bikers likely to be among our top titles.”
More at The Bookseller.
Posted by Beattie's Book Blog at 5:20 am