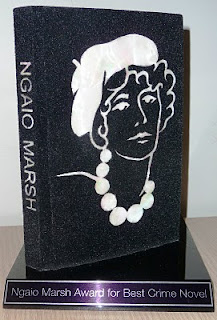 *No, I'm not revealing who has won the 2010 Ngaio Marsh Award for Best Crime Novel today, but I am revealing for the first time what the trophy the winner will receive looks like!

As I've noted previously on this blog, this year will mark the first time (as far as I am aware) that an award for New Zealand crime fiction has ever been made. While the Canterbury Earthquake led to the unfortunate cancellation of the 2010 The Press Christchurch Writers' Festival, where the inaugural award was due to be made, the presentation of the Ngaio Marsh Award for Best Crime Novel (pictured above) has merely been postponed, and a replacement event will occur sometime in the coming weeks (likely in November). I will let you know the details of the eventual event, once things have been confirmed.

Turning now to the Ngaio Marsh Award for Best Crime Novel trophy itself; there's a bit of a story behind the design of the trophy (pictured above). We were wanting to create something that was a little different and unique, that fit the kind of slightly irreverant and low-key style of many of the other crime fiction awards around the world (eg the Edgar, the Agatha, the Macavity, the Ned Kelly, the Arthur Ellis, the Theakston, the Dagger, etc - click on any of the award names to see an image of that award) while still looking good, and was also imbued with some ideas tied to Ngaio Marsh, books, crime writing, and New Zealand. Personally I think the above award does all this.

The award has been handcrafted by Auckland sculptor and visual arts and design lecturer Gina Ferguson, and mounted by Xpress Awards. As is often the case with such creative things, what we have ended up with is quite different from the earliest discussions and ideas between an informal 'design team', which also included Dr Joanne Drayton (Ngaio Marsh expert and acclaimed biographer, and a lecturer at Unitec Design School), as ideas spiralled off ideas, and the team ended up coming up with something quite unique and, I think, exciting and elegant.

In short the award looks like an old-fashioned hardcover book, opened slightly (we realised few of the awards, although they were for books, actually had books incorporated into the trophy), with a stylised etching of Dame Ngaio on the cover. The 'book' is 'flocked', which is a technique that makes it look like it has a velvety black cover, which can shimmer a bit in the light, and the stylised etching is in mother of pearl, which gives a nice simple and elegant black/white contrast, while also tying to the pearl necklaces Dame Ngaio was sometimes photographed wearing. The velvet-ish flocking kind of echoes the Golden Age, while also tying to Dame Ngaio's theatrical leanings. The stylished etching of Dame Ngaio was based on a combination of various photos - working in elements of necklace, artist's beret, wavy hair etc - while looking simple, almost like a pencil or charcoal artist's sketch (again tying to Ngaio's artistic side as well).

The three finalists are: