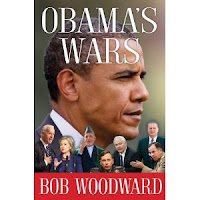 NYT "obtained" an embargoed copy of Bob Woodward's OBAMA'S WARS in advance of next week's release--and serialization in the Washington Post. The Times leads with the theme that some of President Obama's national security team has doubted his Afghanistan strategy and "spent much of the last 20 months quarreling with one another over policy, personalities and turf."


The Post followed with their own story, emphasizing even more explicitly than the Times that Obama wanted "to hand it off and get out of Afghanistan" rather than triple troop levels, "repeatedly pressing his top military advisers for an exit plan that they never gave him."

And from The Daily Beast:
The Juicy Bits in Woodward's Book

Obama’s Wars, ace reporter Bob Woodward’s first book about the administration, comes out September 27. We got it early. The biggest revelations below:

What is Obama’s Wars about?
It’s about policy making. Or, rather, a political argument. The argument is: What is America going to do in Afghanistan, and how can it do it?
Read it at The Daily Beast.
Posted by Beattie's Book Blog at 6:57 am