Sporting legends including Andre Agassi, Henry Olonga, Brian Moore and Errol Christie have made the longlist of this year's William Hill Sports Book of the Year Award, the richest prize of its type anywhere in the world.

Now in its 22nd year, the award will be fought out by titles celebrating boxing, cricket, angling, running, rugby, tennis as well as those looking into the psychology and history of sport. 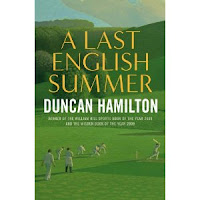 Duncan Hamilton, winner of the award in 2007 and 2009 (for Provided You Don't Kiss Me: 20 Years With Brian Clough and Harold Larwood: The Authorized Biography of the World's Fastest Bowler respectively), is in the running once again, having been longlisted for A Last English Summer, his reflection on cricket's past, present and future. If he goes on to win, Hamilton will make history by becoming the only writer to win the prestigious award three times.

The 13 longlisted books are as follows:

* A Book of Heroes: Or A Sporting Half Century by Simon Barnes (Short Books)

* No Place To Hide: How I Put the Black in the Union Jack by Errol Christie with Tony McMahon (Aurum)

* The Grudge: Scotland vs. England, 1990 by Tom English (Yellow Jersey)

* Liston & Ali: The Ugly Bear and the Boy Who Would Be King by Bob Mee (Mainstream)

* We Ate All The Pies by John Nicholson (Biteback)

* Bounce: How Champions Are Made by Matthew Syed (Fourth Estate)

"From a staggering number of entries - over 130 titles - we have produced a long list of a 'Bookies Dozen' fit to grace the shelves of any sporting library", said Hill's spokesman Graham Sharpe.

Waterstone's Sports Buyer, Joe Browes, said: "If England's World Cup team had been half as strong as this longlist, we might have got somewhere. The William Hill prize shows that sports writing is in ruder health in the UK than many of our own sporting icons. Two contenders stand out; Duncan Hamilton, who is going for the triple, and Andre Agassi, whose book revealed the tortured side of a tennis icon."

The William Hill Sports Book of the Year Award is the world's longest established and most valuable literary sports-writing prize. As well as a £22,000 cash prize, the winning author will receive a £2,000 William Hill bet, a hand-bound copy of their book, and a day at the races. This year's prize was open to any full-length book, providing the subject was predominantly sporting, published for the first time in the UK between 30th September 2009 and 29th September 2010.

The judging panel for this year's award consists of broadcaster and writer John Inverdale; award-winning journalist Hugh McIlvanney; broadcaster Danny Kelly; and columnist and author, Alyson Rudd. Chairman of the judging panel is John Gaustad, co-creator of the award and founder of the Sportspages bookshop.

The shortlist will be announced on 26th October. The winner will be announced at a lunchtime reception at Waterstone's Piccadilly (London), Europe's largest bookstore, on Tuesday 30th November.
Posted by Beattie's Book Blog at 6:30 am