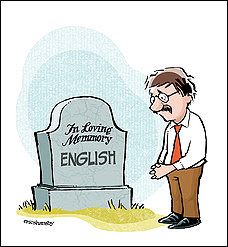 The English language, which arose from humble Anglo-Saxon roots to become the lingua franca of 600 million people worldwide and the dominant lexicon of international discourse, is dead. It succumbed last month at the age of 1,617 after a long illness. It is survived by an ignominiously diminished form of itself.

The end came quietly on Aug. 21 on the letters page of The Washington Post. A reader castigated the newspaper for having written that Sasha Obama was the "youngest" daughter of the president and first lady, rather than their "younger" daughter. In so doing, however, the letter writer called the first couple the "Obama's." This, too, was published, constituting an illiterate proofreading of an illiterate criticism of an illiteracy. Moments later, already severely weakened, English died of shame.

The language's demise took few by surprise. Signs of its failing health had been evident for some time on the pages of America's daily newspapers, the flexible yet linguistically authoritative forums through which the day-to-day state of the language has traditionally been measured. Beset by the need to cut costs, and influenced by decreased public attention to grammar, punctuation and syntax in an era of unedited blogs and abbreviated instant communication, newspaper publishers have been cutting back on the use of copy editing, sometimes eliminating it entirely.

In the past year alone, as the language lay imperiled, the ironically clueless misspelling "pronounciation" has been seen in the Boston Globe, the St. Paul Pioneer Press, the Deseret Morning News, Washington Jewish Week and the Contra Costa (Calif.) Times, where it appeared in a correction that apologized for a previous mispronunciation.

Full piece at Washington Post, be sure to read it.

PS Thanks to playwright Roger Hall for bringing this story to my notice.
Posted by Beattie's Book Blog at 9:31 am