Brains, Brawn and an Unlikely Bond
By Charles McGrath

Left - Associated Press
The boxer Gene Tunney, left, and the writer George Bernard Shaw on a 1929 vacation to Brioni.

He was so enamored of boxing that he wrote a novel about it, “Cashel Byron’s Profession,” and even took up the sport himself. In 1883 he entered the Queensberry amateur boxing championships in London as both a heavyweight and a middleweight, though there is no record that he actually fought any bouts. Pictures of Shaw, scrawny and pigeon-chested, suggest he might have been better off in the bantam division.

Shaw also formed an enduring friendship with, of all people, Gene Tunney, the world heavyweight champ, some 40 years younger. The two men regularly corresponded and exchanged visits and, together with their wives, even spent a monthlong holiday together in 1929, when Tunney, newly married to Polly Lauder, a Connecticut heiress, was hiding from the press in Brioni, the Adriatic resort. 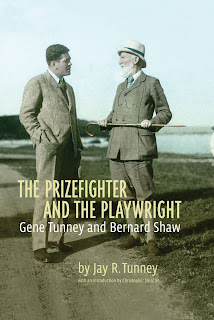 This friendship, the subject of a new book, “The Prizefighter and the Playwright: Gene Tunney and Bernard Shaw,” by Tunney’s 74-year-old son, Jay, is not a secret, exactly. Shaw and Tunney were proud of their connection and took no pains to hide it. Contemporary sportswriters, who disapproved of Tunney’s bookishness, sometimes made fun of him for associating with such a pointy-head.