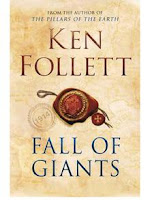 A lot happens on the first page of Ken Follett’s “Fall of Giants.” King George V is crowned at Westminster Abbey. A Welsh boy named Billy Williams turns 13 and begins his wretched life as a coal miner. And Mr. Follett, who was once a Welsh boy himself but grew up to become his generation’s most vaunted writer of colorless historical epics, kicks off a whopping new trilogy. His apparent ambition: to span the whole 20th century in blandly adequate novels so fat that they’re hard to hoist.

“Fall of Giants” begins on June 22, 1911, a time, as Follett fans may longingly note, nearly 100 years before the invention of the e-book reader. But the march of lightweight book technology is hardly its main concern. Mr. Follett has devoted this tome to the implosions of the British, Austro-Hungarian and Russian empires around the time of World War I. It was also the era when the Ottoman Empire had its last sultan, but Mr. Follett overlooks that; after all, he has only 985 pages’ worth of storytelling space. Given the pacing that he prefers, that leaves “Fall of Giants” no room to spare.


It is the method of “Fall of Giants” to integrate large events (e.g., anything involving King George V) with small, personal ones (e.g., Billy’s first wearing of long pants). That’s how it tries to coax forth a grand panorama of history from a mosaic of everyday lives. And the political must become personal, as when the heartless coal mine owner tells Billy: “I don’t like socialists. Atheists are doomed to eternal damnation. And trade unionists are the worst of the lot.” Not surprisingly, Billy will grow up to fight for the rights of the little people.

And for a UK look at the title this from The Telegraph
The title is being published in 14 countires simultaneously on 28 September.
Ken Follett's Homepage.
Posted by Beattie's Book Blog at 8:07 am