Handbags give kiwi kids the gift of reading 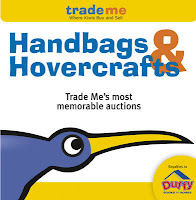 Anyone eager to get a sneak preview of these and other stories featured in ‘Handbags & Hovercrafts’, the new release from Trade Me and Random House, can do so from today, September 29.

Duffy Books in Homes, a literacy charity which gives away hundreds of thousands of books to children in low-decile schools every year, is selling the first 100 copies of the book via Trade Me’s Daily Deals section from 10a.m. today.

Trade Me is donating 100% of the royalties from the sale of the book to the charity. This is not just limited to the Daily Deal but also applies to all ongoing retail sales.

Paul Ford, Trade Me’s head of community, said Duffy Books in Homes was an obvious choice as a charity partner. “It’s a great cause and should be good for a few laughs as Kiwis remember the weird and wonderful auctions they have talked about at the work water-cooler or at their backyard BBQs for the past 10 years.”

Since the official launch in 1995 with 80 schools, 16,000 students and 14 sponsors, the Duffy Books in Homes programme has grown to encompass 547 schools, around 100,000 students and 198 sponsors in 2010. More than seven million books have been distributed to children in low-decile schools since the programme’s inception and August 24th marked the 15th anniversary of its launch.

The Trade Me Daily Deal for ‘Handbags & Hovercrafts’ is available from 10a.m. on September 29 at www.trademe.co.nz.
Posted by Beattie's Book Blog at 5:53 am