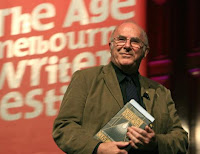 Picador has acquired the rights to a new title by broadcaster Clive James. Senior editor Sam Humphreys bought UK and Commonweath rights to Point of View from Robert Kirby at United Agents.

The title will be made up of pieces originally aired on the BBC Radio 4 programme and will also include new introductions to each piece from James. It will be published in autumn 2011.

Humphreys said: "It's a fascinating glimpse into the key concerns, issues, obsessions and trivia that have kept us occupied in the first decade of the new millennium."
Posted by Beattie's Book Blog at 7:02 am