The ‘Freedom’ Agenda
By David Brooks 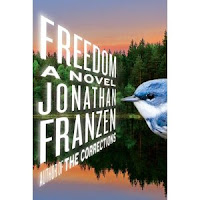 Many of his characters live truncated lives. There’s a woman who “had formerly been active with the SDS in Madison and was now very active in the craze for Beaujolais nouveau.” There are people who devote their moral energies to the cause of sensitive gentrification. One of the “heroes” experiences great fits of righteous outrage when drivers ahead of him change lanes without the proper turn signals.

The central male character, Walter, is good but pushover-nice and pathetically naïve. His bad-boy rival, Richard, is a middle-aged guy who makes wryly titled rock albums and builds luxury decks to make ends meet. He is supposed to represent the cool, dangerous side of life, but he’s strictly Dionysus-lite.

One of the first things we learn about Patty, the woman who can’t decide between them, is that she is unable to make a moral judgment. She invests her vestigial longings into the cause of trying to build a perfect home and family, and when domesticity can’t bear the load she imposes, she falls into a chaos of indistinct impulses.

In a smart, though overly biting, review in The Atlantic, B.R. Myers protests against Franzen’s willingness to “create a world in which nothing important can happen.” Myers protests against the casual and adolescent language Franzen sometimes uses to create his world: “There is no import in things that ‘suck,’ no drama in someone’s being ‘into’ someone else.” The result, Myers charges, “is a 576-page monument to insignificance.”

But surely this is Franzen’s point. At a few major moments, he compares his characters to the ones in “War and Peace.” Franzen is obviously trying to make us see the tremendous difference in scope between the two sets of characters.