As of January, executive editor Adam Bellow's list of conservative books at Harper Collins will formally constitute an imprint, Broadside Books, with Bellow as editorial director.
The line will "project an attitude of forward engagement with the war of ideas, both between right and left and within the conservative movement." The company says "Broadside will publish across a wide spectrum of nonfiction genres -- political and philosophical critiques of liberalism, revisionist histories investigative journalism, issue-focused books by leading political figures, political memoirs, and books that challenge or rethink various aspects of conservatism itself."

Rowling to Appear on Oprah 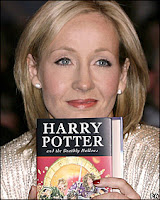 J.K. Rowling did a "wide-ranging interview" with Oprah Winfrey in Edinburgh that will air this Friday, October 1. The announcement says her remarks include addressing the pressures of sudden stardom: "You ask about the pressure. At that point, I kept saying to people, yeah I'm coping...but the truth was there were times when I was barely hanging on by a thread."
Posted by Beattie's Book Blog at 5:39 am