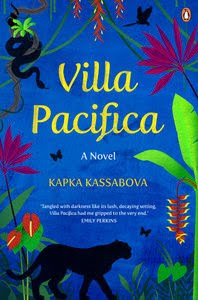 Villa Pacifica
A review by Maggie Rainey-Smith
I was given this book to review just as I was heading for five nights in Vanuatu. Oh goodie I thought; I will be in just the right location. But this novel is not situated in some benign, romantic, friendly Pacific idyll; it is in some purposely unnamed and un-locatable South American archipelago (I did Google a review in the Herald, and it seems the author was influenced by her travels in Ecuador).

Normally, as a reader, I am wary of threat and menace and try to outwit the author who is attempting to lure me into their deliberately unstable, unpredictable plot-line. But Kapka Kassabova (blessed with flawless looks and a fabulous name) very quickly won me over. This is the first of her books that I have read. I knew when I started it, that English is her second language and so I searched in the first few pages for signs of this, unbelieving and tripping just once on one over-long sentence, reading it twice and then letting go. For this is a gripping page-turning read, where the threat and menace are bearable because of the sensual undertow throughout. I liked Ute the Finnish-English girl with the German name who is the key character in the story. She is a travel guide writer caught in a sensual loop of both time and place. I liked Ute and her eczema, the painful burning of her less than perfect skin her lips that look like lipstick bleeding. She is a young woman of a certain age trying to conceive her first child. The eczema it seems is a reflection in some way of a disconnection between her spiritual, biological and intellectual self.

The novel begins with Ute and her husband Jerry on a bus stopping it seems in the middle of nowhere somewhere on the South American continent, but we are never told exactly where and rushing to a map will not help. The people we meet and the way in which they stumble upon Villa Pacifica, the uncertainty around the actual location and the loop that leads to it, generate a page-turning curiosity. The story revolves around their time at Villa Pacific, the people who run the resort (although resort may not be quite the right word) and the guests. Mikel and Lucia the owners of Villa Pacifica have attempted to create their own small utopia and have set up an animal sanctuary funded by their paying guests... but politics and changing weather patterns have undermined their dream (that and other more human foibles). Consuela, an interesting character from the town is implicated in this with her mysterious (missing) artist husband Oswaldo.

There is Max, Alpha-boorish male, married with four children, on holiday with his wife Eve (ah, quintessential life-giver Eve) and they have travelled this far so they can conceive another child – Max with his prolific sperm in contrast to Jerry, who seems to have trouble impregnating Ute. Max is an almost caricature, but a terrific vehicle for the building menace and tension that develops among the guests. Eve it is revealed has married him because of the financial security he can offer her and her children. He is the ultimate right-wing sexist pig who pushes everything and everyone to their limits and Kassabova is clever enough to develop his character beyond the stereotype so that much as we abhor this ugly man, we are drawn like Ute to his role in the story, as the man of action, the man who raises the questions that simmer unspoken by the others. I was struck when this ghastly character confronted Ute about her plans for motherhood, her possible declining fertility. It reminded me of a holiday years ago with another couple in Fiji, when a beautiful Italian girl (similar age to Ute and we, the foursome all middle-aged, married with children) – drew her beautiful self up beside the pool and confided to us all that she wanted babies but her aloof and very handsome spouse (perhaps Luigi, I can’t recall)... did not. He was swimming across the other side of a very blue pool. It was the most personal of conversations among complete strangers and I do recall both husbands were captivated and possibly strategising how they might, if Luigi wouldn’t... I’d forgotten about this very personal revelation from a stranger and then reminded in fiction of the way our guard is lowered when out of our usual routines and even more so, in exotic remote locations.

Everyone else appears to some extent to be rather passive (perhaps the one flaw with Ute, her passivity) in contrast to Max, so that although he is hateful, he is also somehow rendered interesting through his exuberance. A small race to the beach with local children that Ute somehow finds herself joining, that Max instigates, to me encapsulates something of his character. In spite of herself, and not wanting to, Ute runs. There is also a most creepy but compelling encounter with Max in the sea – best not to reveal too much – but more compelling even than Max is the enigmatic almost not there Carlos, the ethereal sensually erotic, almost fantasy cave-man, the silent man, in contrast to the loud and boorish Max. Carlos who cares for the animals... Carlos, who embodies animal sensuality and who is both grounded and real and yet mysteriously almost not there at all. And, there’s Jerry, Ute’s husband the writer. We have literary quotes via Ute to develop Jerry’s authenticity as the writer, but he is never that well developed as a character - a sort of man on the periphery and at times I couldn’t quite believe the disconnection between him and Ute. But as the story unravels and reaches its finale, perhaps this peripheral role is authenticated. I was annoyed at how they kept missing one another and I wanted Jerry to care more, to be more active. Ah, but the story loops, and moves into a kind of magic realism and I wanted it to remain right in the real, so for me, the ending is a disappointment, but I would not let that spoil a great read. I also know from my many book group encounters that others love this instability and confusion in their reading, so it says as much about me that I wanted for the story to remain on track and unravel coherently – just as I tried to dodge the threat and menace, so I was trying to dodge the magic realism.

I highly recommend this book as a great holiday read, sensual, annoying, dangerous, interesting, and gripping and lots of nicely spiky political bits interspersed through conversations that the guests holed up at Villa Pacifica are forced to have. There is a storm warning and the guests are contemplating whether to stay put or to try and leave. Newly arrived guests Liz an air hostess with Qantas and Tim her Asian Australian male friend who “plays for the other team” are drawn into Max is at the centre again stirring up trouble, and Jerry the writer makes the comment “I’m beginning to feel like I’m stuck in Lord of the Flies’ and humorously this is lost on Max and his wife, with Eve attempting to correct Jerry saying “You mean Lord of the Rings”. I learned stuff along the way too... for example how the word gringo evolved but I won’t spoil that for those of you who don’t already know.

There is some very nice writing – I liked this in the second chapter when Jerry and Ute have been dumped off the bus in the middle of nowhere. “Only a few men remained scattered inside the dark, smelly bus, fast asleep and snoring. Ute knew there was a special kind of poverty in some parts of the word where sleep is the only commodity left to people. And even their sleep is somehow threadbare.” are arriving in the middle of nowhere and looking for Villa Pacifica. And further on ‘the sun was an egg poached in clouds, but even so the heat rose from the parched landscape slowly, with a hiss’.