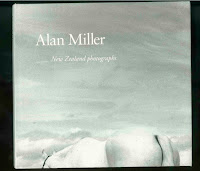 Lyricism, beauty and spirit inspire photographer Alan Miller’s personal response. He has said of his work that ‘you are trying to dig something out of things – anything that can sustain you’. Alan Miller has travelled extensively and for prolonged periods in the pursuit of his subject matter. The mapping of internal emotions or states of mind on to the landscape, or man-made forms, is one of the key elements in his body of photographs.
Alan Miller has studied the history of painting, and it is as much the traditions of painting as those of photography that are apparent in his work. His often ambiguous and hauntingly beautiful black and white images have been created in many countries over the past thirty years.

In this, Alan Miller’s first publication, the collection of photographs speaks of the New Zealand landscape with a subtle and lyrical voice.
The sumptuous book includes an essay by Martin Edmond and an interview with the photographer byKriselle Baker.

About the book's contributor's:

Alan Miller was born in Oamaru, New Zealand, in 1947. After several years travelling in the 1970s he returned to New Zealand, completing a degree in art history. At the same time, he began to take photographs. He has continued to photograph full time and has had numerous exhibitions. He lives with his family in Auckland, New Zealand.
The book includes an essay my Martin Edmond and an interview with the photographer byKriselle Baker.

Martin Edmond, writer, was born in Ohakune, New Zealand, and grew up in small towns in the North Island. He has an MA (first-class honours) in English language and literature from Victoria University of Wellington. He joined the Red Mole theatre troupe in 1977 and spent five years touring. Since then he has been a freelance writer and has written several books and screenplays. In 2004 he was Literary Fellow at the University of Auckland and the following year won a Montana New Zealand Book Award for his biography, Chronicle of the Unsung. He lives and writes in Sydney, Australia.

Kriselle Baker is a freelance writer and curator. She has an MA (first-class honours) and has recently submitted a PhD thesis in art history. The Desire of the Line: Ralph Hotere Figurative Works was published in 2005 and a monograph on Hotere’s paintings for which she acted as image editor and contributing essayist in 2008. She lives in Auckland with her husband and daughter.

To read a full review of the book and interview with the author that appeared in the New Zealand Herald recently click here.