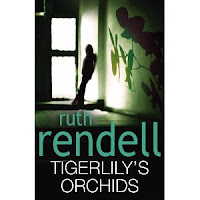 Published by Hutchinson, London.
RRP $38.99
Well, this is my very first Ruth Rendell read. It seems amazing when you realise that she has written so many novels and according to the blurb, sold over 8 million books. I was on holiday and this would have to be a holiday read for sure. I expected more murder and mayhem, and a lot more gore. Instead, I found sly humour, a sociological slice of London, people I recognised but didn’t particularly care for deeply. I was reminded of “the Elegance of the Hedgehog” by Muriel Barbery, where the author used the inhabitants of a French Apartment block as a vehicle for her story but this is where the similarity ends. Rendell has done the same except this is London, and the concierge (caretaker) is most definitely not a closet intellectual but does turn out to be a closet something-rather-more-awful. I found, in the end, I didn’t really care enough about any of the characters, except for Olwen who has decided to drink herself to death. I worried the whole book through about Olwen and it was she who kept me turning the pages, and it was her life that I most cared about although I’m not sure if that was the author’s intention.

Stuart is the catalyst for most of the action. He is a shallow, vain, inept and very inexperienced young man who out of boredom and possibly because he can afford to due to a recent inheritance, decides to throw a house-warming party in his new flat. He invites most of the people from the building including the caretaker and his wife. Stuart, who lives in Lichfield and the rather clichéd named Tigerlily (Ti-ka-lee-lee) who lives in an adjoining block of flats named Springfield, are perhaps the protagonists, for want of a better word. Then there is Duncan, once and briefly a policeman who is the eyes and ears of Lichfield House. He is a rather boring character but through him we gain a view of the other characters and their activities. I found it a bit unbelievable that he stumbles on some marijuana plants and doesn’t know what they are – surely in his training as a policeman, however briefly, he would have encountered this? But that’s being possibly a bit harsh, as the rest of the story is well constructed and everyone’s lives somehow collide, influence and eventually unravel the plot – the murder.

Did I care who dunnit? Not really. But I suspect this was not the main point. I felt that Rendell was setting out to carve a nice sociological slice through modern London, the age-groups, the ethnic groups, the mores and in many ways, the futile fatalism of the lives of the inhabitants of Lichfield House. At the start of the novel, snow is painted into the story warmly, evocatively and alluringly and then the summer approaches and the weather is another character, as it always is in London. “The wind blew apple and chestnut blossom on to the grass like snow.”

I loved ‘Wicked Wine’ where Olwen purchased her gin, run by Mr Ali, who closes down for Ramadan. You have to love the underlying humour, the fun that Rendell is having. I enjoyed the names of the characters, in particular the three spoilt and rather aimless young women; plump Molly Flint and skinny Noor Lateef (whose father funds the flat they live in), and Sophie Longwich. As I write this, I realise I liked the characters more than I thought – but I wasn’t moved by them, and nor did I care about them, but yes, I rather liked them, at times, enjoyed the humourous insights. There’s awful Claudia and her even more awful husband Freddy Livorno who do not live in the building, but who are both central to the plot. And ghastly Wally (yes, Wally) Scurlock, the caretaker with a secret life and his wife Richendra who does the cleaning in her mini skirt and high heels. Then there is the unlikely love story between Marius Potter and Rose Preston-Jones – oh, but I won’t say any more about that. And, I must not forget Michael Constantine who writes articles for a newspaper dissing alternative medicines and solar panels but never quite doing the research and misquoting important facts, generating emails and twitter messages galore to the paper. Yes indeed, Rendell is having a lot of fun.

So you can see, quite a cast, and now that I have written about them, you have to stand back and admire how Rendell has woven them all into this story, where perhaps the murder (and I can’t tell you who died and who did it), is less important than the lives around it and the impact upon them. Having not read any other Ruth Rendell, I’d love to from anyone who is a keen fan, how this her latest novel rates?

Footnote:
Maggie Rainey-Smith is a Wellington based author/reviewer. She has two novels published by Random House, About Turns and Turbulence – a third novel is approaching the final draft. Maggie is regular book reviewer for this blog.
Posted by Beattie's Book Blog at 7:08 am

Maggie, having just finished "Tigerlily" I would agree with most of your comments. For two other, better, Ruth Rendell/Barbara Vine novels I'd strongly recommend "A Dark Adapted Eye" and "A Fatal Inversion." Catherine

Maggie, having just finished "Tigerlily" I'd agree with most of your comments. Two better Ruth Rendell/Barbara Vine novels are "A Dark Adapted Eye" and "A Fatal Inversion." Catherine