The North Shore: An Illustrated History 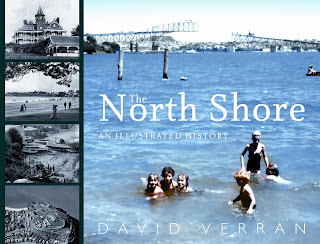 ‘The stories in this book reveal the incredible amount of effort and sheer hard work which transformed the North Shore from its small beginnings to the proud city it is today. There is no doubt that we have a great deal to celebrate, and to be grateful for.’ – Andrew Williams, JP, His Worship the Mayor, North Shore City.

Auckland’s North Shore has long been perceived as a place apart, known for its beautiful beaches and relaxed lifestyle. Until the opening of the Auckland Harbour Bridge in 1959, the North Shore was viewed by many city-siders as a holiday destination. The past 40 years have seen the North Shore metamorphosis from small borough communities into a sprawling city in its own right. The growth of the region has been simply phenomenal, 20,000 people in the mid 1920s, 53,237 by 1961 and upwards to the North Shores current population of 230,000.

For the first time we have a book which focuses on the complete history of the North Shore and entails the Shore’s development from Maori and early contact times up to and beyond local body amalgamation and the formation of the first ‘North Shore City’ in 1989. The North Shore: An Illustrated History encapsulates the full history of both the people and the city and covers themes such as transport, industry, population growth and settlement patterns, arts and architecture, religion and sport. Throughout there are separate boxes which give a snap shot of the region in a particular year, giving a personal taste of living on the Shore and enabling direct contrast of the changes that have occurred over time.

The North Shore: An Illustrated History is beautifully designed with many of the historic photographs and paintings coming from the North Shore City Council Library and Takapuna Library archive and photograph collections. From apple orchards and kauri gum fields to John Leon Benwell’s Picture Palace, everything is here in a gorgeous coffee-table format that reflects and celebrates the diversity of the region in time for the Supercity merger.

As a former North Shore-ite, (Northcote Point), 1978-1992, The Bookman found the book a most fascinating read and especially enjoyed the wonderful historical photographs. This one below shows passengers arriving at Northcote Point, circa 1910. 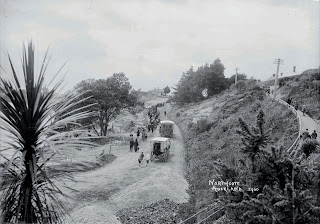 About the author:
David Verran currently lives in Takapuna and manages the Auckland Research Centre at the Central Library of Auckland City Libraries. He is president of the North Shore Historical Society and has published many articles and book reviews. Born in Devonport, and raised in Birkenhead he can trace his family’s roots on the North Shore to 1876. He is passionate about the history and people of the region and has frequently lectured on the subject. 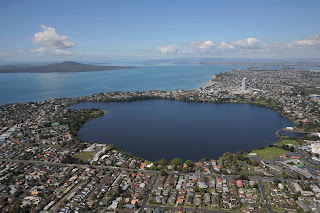 Library event:
The North Shore: An Illustrated History celebrating at the Takapuna Library

The Friends of the Takapuna Library, author David Verran and Random House, invite you to an occasion to celebrate the recent publication of The North Shore: An Illustrated History.

Copies of the book will be available for sale for signing by the author.
$2 entry fee or free admission for Friends of the Takapuna Library.
RSVP to Helen on 09 486 8469 or Helenw@shorelibraries.govt.nz
Posted by Beattie's Book Blog at 6:42 am