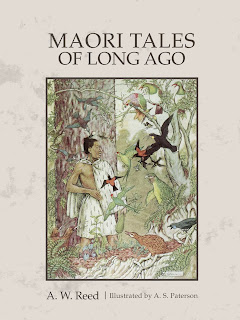 There were years when, as both authors and as publishers, A.H. and A.W. Reed were the main source of Maori myth and legend for New Zealand readers. Now, nearly six decades after A.W.'s Wonder Tales of Maoriland appeared, New Holland have combined that book and his subsequent Tales of Long Ago in this handsome facsimile edition.
You'll already know many of the 16 stories. Maui fishes up a new land, and makes the Sun more user-friendly; Hinemoa swims across Lake Rotorua to her flute-playing lover; bereft Uenuku becomes a rainbow.
Others deserve this chance for a new readership. Hatupatu evades the flying ogress; ugly-toothed Kae kills a whale and suffers for it; Tawhaki climbs to Skyland to seek his wife and daughter.
"They are good stories," says David Simmons in his foreword. Indeed they are, with vigorous plots and the engaging young protagonists Rata and Hine. The tone may sometimes strike 21st century readers as patronising, but motifs of death, revenge and the making of fire give added depth to events. Reed writes eloquently, if verbosely. Enjoy counting the euphemisms.
With their strong sense of place and the natural order, these stories are also social history and moral comment. They come with the lively, impish illustrations of longtime Dominion cartoonist A.S. Paterson - 70-plus in black and white; eight in those endearingly subdued 1940s water-colours.
All this in a tall, stylish hardback at a truly bargain price. Bibliophiles will admire it; grandparents will remember it; teachers will appreciate it. Most importantly, kids should respond to it. Good stuff. 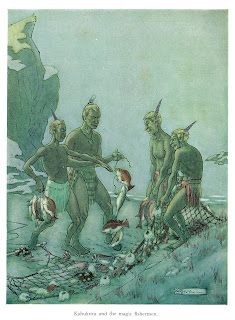 Further footnote:
The Bookman is curious about this title as both of these classic books by the late A.W.Reed would have been in the backlist of Reed Publishers which was acquired by Penguin Books several years ago.Penguin  must therefore have made a decision not to republish them  hence opening the way for other publishers and they have now turned up in New Holland's list. My feeling is that this is a good move by New Holland. I wonder what other gems are in that Reed backlist that Penguin are going to allow to go elsewhere.
Posted by Beattie's Book Blog at 1:16 pm