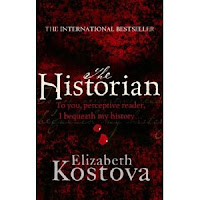 Elizabeth Kostova says she can’t be held to blame for the current vogue for all things vampire. Yes her bestselling debut novel The Historian is based on the Dracula legend and comes complete with hungry bloodsuckers and silver daggers through the heart. But, as she points out, vampire trends in literature come and go and they’ve been doing that since 1740 or so. “That in itself is fascinating because they don’t die, they literally don’t,” says Kostova. “They always come back because they’re so important to us. So while we may get tired of the current trend for vampires I’m sure it’ll happen again in 30 years or so.”

Kostova is a softly-spoken, mid-forties American who spent a decade working on The Historian, writing it round the edges of the various jobs she held.
“I have the classic writers resume, mowing lawns painting houses, being a companion to older people, a lot of teaching,” she says. “All were jobs that would support my writing habit. Sometimes I only had ten or twenty minutes a day to write. I thought of it as knitting a sweater. I’d carry it in my bag and if I had time I’d knit a few rows. I’m so glad I didn’t know it was going to take ten years when I started because I probably would have been discouraged and given up.”

A blend of history, travelogue and thriller, The Historian doesn’t have much in common with other vampire sagas like True Blood or Twilight. It’s a chunky, epic book and a more challenging read that required a great deal of in-depth historical research. Kostova has chosen to follow it with something quite different but equally labour intensive. Her latest novel The Swan Thieves (Little, Brown, $38.99) is an art-based historical thriller. It’s the story of an enigmatic artist Robert Oliver who finds himself in a psychiatric institute after attacking a canvas in the National Gallery of Art. Refusing to speak a word, he spends his days repeatedly painting images of the same beautiful woman. His therapist is so determined to understand what’s going on with this tortured genius he delves into his past and seeks out the stories of the women who have been important to him. The ensuing mystery takes us to France and into history, to the life of a talented young Impressionist painter, Beatrice de Clerval.

The book is a gripping mystery about obsession and the destructive power of love but Kostova’s greatest achievement is that it makes history seem so close you could touch it.
“I didn’t set out to do that deliberately but I’m glad if it happens,” she says. “I felt that way too. I felt the closeness of the 19th century and of the generations tied to each other by relationships reaching back through the centuries.”
Although not an artist herself, she had long wanted to write a novel about painting. “I know several painters very well and they have the most direct, visceral experience of the world,” she explains. “They will look at something ordinary like a table and see different tones, shades of colour, shape, depth
and texture. That experience fascinates me and I’m a little envious of it. So I wanted to explore it. And I think, after writing the book, I do see the world a bit differently. I notice things more.”

Kostova, who lives in the mountains of North Carolina, is the daughter of a retired professor and she credits her upbringing with fuelling her curiousity about the world. Her childhood home was full of books and international students, her father a great teller of stories. When he was awarded a fellowship in Eastern Europe, the family accompanied him there and it was then that the groundwork for The Historian was laid although Kostova didn’t realise it at the time. Since that book’s mammoth success she’s revisited some of the areas in which the story set and the experience had a profound and lasting effect on her.
“It was very moving to see how the book was received in those countries because so few western novels are set there,” she explains. “But I also saw a lot of Eastern European writers in a really difficult plight with very little of the funding we are able to compete for.”

Kostova, whose husband is Bulgarian, was determined to do something to help. So in May 2007 she created the Elizabeth Kostova Foundation with the aim of creating opportunities and programmes to support Bulgarian writing.
“The main thing we did is create an annual international fiction seminar,” she says. “This will be its third year and I’m incredibly proud of it, it’s taken off like a rocket. Every year it gives five fellowships to Bulgarian writers and five to writers from all over the English writing world.
“I think when you’ve had some kind of totally unexpected, freak luck you have to give back,” adds Kostova who is also involved with US literacy projects. “The success of The Historian was very startling to me. And I felt I wanted to do something to serve the literary community.”

Although busy juggling family commitments with her various social service projects, Kostova has already started working on her next novel. Again it will be a big book, requiring a heavy load of historical research. “I keep wishing I wrote short novels with entirely American contemporary settings,” she laughs. “This one is a very different subject to anything I’ve tackled before and I’m at that stage where I’m starting to realise how little I know about it. So I’m going to have to really knuckle down and learn.”

Footnote:
Nicky Pellegrino, in addition to being a succcesful author of popular fiction, (her latest The Italian Wedding was published in May 2009 while her next, Recipe for Life is due from Orion in April), is also the Books Editor of the Herald on Sunday where the above piece was published on 21 March.
Posted by Beattie's Book Blog at 3:40 pm