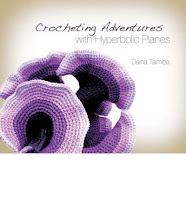 Crocheting Adventures with Hyperbolic Planes by Dr Daina Taimina (A K Peters) has won the 2009 Diagram Prize, having received the majority of the public vote for the oddest titled book of the year at thebookseller.com.

Taking 42% of the votes cast, it beat off competition from What Kind of Bean is this Chihuahua? By Tara Jansen-Meyer (Mirror), which took 30% and Collectible Spoons of the Third Reich by James A Yannes (Trafford), with 11%.

Afterthoughts of a Worm Hunter by David Crompton (Glenstrae), Governing Lethal Behavior in Autonomous Robots by Ronald C Arkin (CRC Press) and The Changing World of Inflammatory Bowel Disease by Ellen Scherl and Marla Dubinsky (SLACK Inc) took 17% between them.

Horace Bent, The Bookseller magazine’s legendary diarist and custodian of the prize, said: “Crocheting Adventures with Hyperbolic Planes proved to be the initial front runner. It defended its poll-topping position despite strong support for the spoon-carrying Third Reich, once again attempting to muscle in on someone else’s territory.

"But the public proclivity towards non-Euclidian needlework proved too great for the Third Reich to overcome. If only someone had let the Poles know in ’39.”
Full report at The Bookseller
Posted by Beattie's Book Blog at 9:06 am