BIsto Children's Book Awards 2010The 10 book shortlist for the 20th Bisto Children’s Book of the Year Awards has been announced. The winners of the Awards will be announced at a reception on Monday, 24 May 2010 at No. 6 Kildare Street in Dublin. 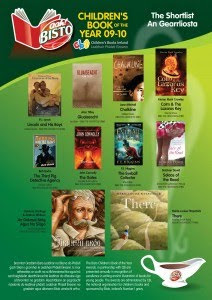 Maire Uí Mhaicín, Chair of the 2009-10 Judging Panel, said: “This year’s shortlist provides challenging and entertaining reading material: the works included span across the ranges of fantasy, mystery, folklore and the gritty realities being endured by young people as they cope with life changes. The variety of books shortlisted will ensure satisfying reading material for readers of different ages, interests and reading levels.”

There is a total prize fund for the awards of €19,000, with the overall winner of the Bisto Book of the Year Awards receiving €10,000. The winner of the Eilís Dillon award (presented to a first time children’s author) will receive €3,000. The remaining prize fund will be split equally between three Bisto Honour Awards – one for Writing, one for Illustration and a Judges Special Recognition Award and the Children’s Choice winner will receive a crystal plate in recognition.

The Bisto Children’s Book of the Year Awards are presented annually in recognition of excellence in writing and/or illustration of books for young people. The awards are administered by Children’s Books Ireland, the national organisation for children’s books and sponsored by Bisto gravy.

This is the 20th year of the Bisto competition and winners have included John Boyne for The Boy in the Striped Pyjamas, Marita Conlon McKenna for The Blue Horse and Eilís Dillon for The Island of Ghosts.
Full report here.
Posted by Beattie's Book Blog at 6:31 am