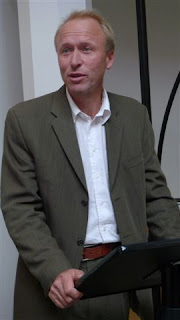 A prominent Auckland publisher, Sam Elworthy,(pic left - Gil Hanly), has been chosen as the new chairman of the Michael King Writers’ Studio Trust.
Dr Elworthy, who is director of the Auckland University Press, joined the trust in 2009 and was elected chairman at its annual meeting last week.
He replaces Bob Ross, who for many years led New Zealand publishing in firms like Tandem Press and Benton Ross.  Mr. Ross stood down from the position after nearly four years. Mr Ross remains on the trust and continues to serve as deputy chairman.
Mr Ross said the Michael King Writers’ Centre had succeeded well beyond expectations over the past three years. A number of new people had joined the trust in 2009, bringing fresh energy and new ideas. It was a good time to have a change of leadership.

In 2010, the centre has been able to offer four paid residencies to writers, ranging from eight weeks to six months, thanks to support from Creative New Zealand. It also provides accommodation and working space to a growing number of visiting authors. Last year, the centre held its first residential workshop, which was about writing history and biography. The centre is also supported by the North Shore City Council and the Lion Foundation, with support from charitable organisations such as the ASB Community Trust and the Creative Communities Scheme on a project basis.

Sam Elworthy grew up on a farm in South Canterbury and went to university in Dunedin where he edited the student newspaper and wrote a book about student life.  He spent fifteen years in the United States, completing a doctorate in history, before going into book publishing. He led the editorial team as Editor-in-Chief at Princeton University Press before returning to New Zealand in 2007.  He now lives in Devonport.
Posted by Beattie's Book Blog at 2:27 pm