Andrew Motion to write sequel to Treasure Island
The former poet laureate takes Jim Hawkins back to the island in search of the lost treasure 126 years after Stevenson's story
Alison Flood, The Guardian, Friday 26 March 2010 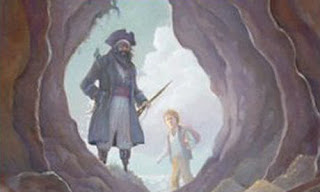 Treasure Island by Robert Louis Stephenson. Motion promises a swashbuckling sequel that will be just as 'grim'.

After 10 years as poet laureate it's not surprising Andrew Motion is in the mood for something new, and he reveals today that his new writing plans involve swashbuckling pirates.
The acclaimed poet and biographer is to make his first venture into children's books after striking a deal to write a sequel to Robert Louis Stevenson's classic story Treasure Island, first published in 1883.
Motion, who stepped down as laureate last May, will pick up the story a generation on in Return to Treasure Island.
The last we heard of Stevenson's treasure-hunting cabin boy hero, Jim Hawkins, he had just returned from Treasure Island, loot in hand, after mutiny, murder and derring-do on the high seas, swearing never to return again "to that accursed island" despite the treasure that remained.
The formidable one-legged pirate, Long John Silver, meanwhile, has disappeared, and only five men return to Bristol on the good ship Hispaniola: "Drink and the devil had done for the rest".
In Motion's book, Jim's son, Jim Jnr, lives with his father in a Thames-side pub outside London, where he is visited by a girl who turns out to be Long John Silver's daughter. She convinces him to steal his father's map of Treasure Island – "nine miles long and five across, shaped, you might say, like a fat dragon standing up, [with] two fine land-locked harbours, and a hill in the centre part marked 'The Spy-Glass'" in Stevenson's novel – and to run away and seek the remaining treasure with her.
"It is and it isn't a children's book. I hope children of a certain disposition will like it but there's quite a bit of dark stuff in the story I'm writing – it's pretty grim," said Motion. "A lot of people die in the original, though, with extraordinary frequency and casualness – trampled to death by horses, or left on the island
Alison Flood's full story at The Guardian.
Posted by Beattie's Book Blog at 8:09 am