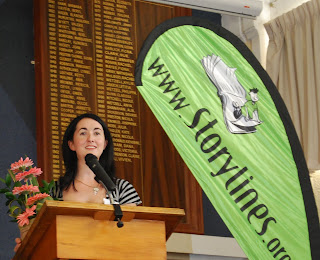 South Auckland author and primary teacher Leonie Agnew has won the Storylines Tom Fitzgibbon Award, given annually by the Storylines Children's Literature Charitable Trust of New Zealand for a manuscript of a novel suitable for 8-12 year-olds by an unpublished author.
The award, sponsored by Scholastic NZ, was presented at the Storylines annual Margaret Mahy Day held in Auckland on 27 March, 2010. It commemorates Tom Fitzgibbon, a former tertiary teacher and pioneer children’s book advocate.

Leonie Agnew, a writer since childhood and a former copy writer, belongs to the well-established writers’ group Kiwi Write4kids.
"Leonie Agnew's manuscript, entitled Super Finn, is a story about friendship, and was described by the judges as a refreshing read for younger readers. It was chosen from a strong field of 28 entries," says Trust chairman Dr Libby Limbrick.
“It is an outstanding feat that Leonie was also shortlisted for our other award sponsored by Scholastic, and also announced today – the Storylines Joy Cowley Award,” adds Dr Limbrick. “It is clear that Leonie has a future as a writer, and that with writers like her emerging, New Zealand children’s literature promises to be as strong in the future as it is right now.”

Two other manuscripts were shortlisted by the judges: The Worm Hole by Raewyn Brockway, from Wellington, and Time Tunnel by Julie Scott, from Devonport.
The Tom Fitzgibbon Award was established in 1995 and is open to any unpublished writer resident in New Zealand. It carries a monetary prize as well as the offer of publication by the sponsor, Scholastic New Zealand.
Previous winners who have gone on to establish writing careers include Heather Cato, Vince Ford, Alison Robertson and Jillian Sullivan.
Posted by Beattie's Book Blog at 8:12 am