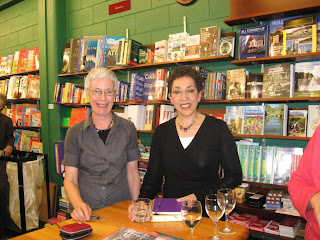 Wellington has had a literary feast of late, with the Writers and Readers week just over and already Monday night, NZSA hosted Mia Farlane and last night, Marsden Books in Karori hosted Andrea Levy - Pic left shows Anna from Marsden Books with Andrea.
The shop was full of eager readers (mainly women) and we were feted first and generously with wine and food.   It felt as if everyone in the room had read and loved ‘Small Island’ and we were all waiting with bated breath to hear her speak about her new novel ‘The Long Song’.

‘Small Island’ was a revelation to me.   Having travelled and lived in the United Kingdom in the early seventies, I had been astonished to find West Indian bus drivers speaking with broad Cockney accents, as second generation immigrants.   In ‘Small Island’ I found myself transported back to Jamaica to begin that journey and to understand more about their relationship with Britain. I was fascinated to learn how many came to Britain as part of the services during the Second World War, and were considered equal (unlike the American Black soldiers who had to be segregated) – but that when these same men returned as immigrants to England, they were second (or even perhaps third) class citizens.

Andrea Levy said that the inspiration for her latest novel  ‘The Long Song’, came when she was attending a conference on slavery.   She met a woman who was ashamed of her history and decided she would look into the history of the slaves and find out more.  But, she explained to us, she didn’t want to write a grim and sad story, she wanted to write something that would make this women she had met, proud of her ancestors.   And so she began her research.   Some of it was very grim indeed.   Andrea quoted from Immanuel Kant, Anthony Trollope and David Hume (a philosophical hero of the Enlightenment) and it was quite shocking to hear such starkly racist quotes.
Through reading and research (reading what the Plantation owners and their wives have written), Andrea said she was able to conjure up the lives of the slaves on those plantations.   Her novel is about those nameless people who were slaves and for whom there are no records of their births, deaths, or marriages.    She described the Caribbean as a big factory to which the slaves were shipped to work and said she had not realised until she began her research that slavery lasted for three hundred years.    “It wasn’t just an atrocity”, she said, “but a society”.
And this is what Andrea Levy as done in her latest novel – she has conjured up a story of this society of the strong and feisty women who inhabited it, giving them a voice.     She read from the novel and the humour and passion, so brilliantly rendered in ‘Small Island’, was obvious.   You can go to her website and read extracts for yourself, to get the flavour of this new book.
http://www.andrealevy.co.uk/the_long_song/index.php