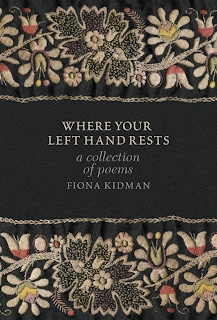 I have received a flurry of e-mails commenting about this new title and particularly about the gorgeous design and illustrations. Random House has kindly agreed to let me post Fiona Kidman's Foreword to the book along with her note about the illustrations and I have also gleaned some background information on the book's talented designer, Pieta Brenton.

Foreword
It is half a lifetime ago that I began to publish my poems in book
form. Exactly.
And now it’s half that time again since my last collection. Poetry can
apparently desert a writer but I don’t think it ever really does, not
if you read and listen to the words and inherent music of other poets.
The thing is, it’s not a trick you can turn on, or even the hard slog of
an extended work of fiction — at least I don’t think so, though some
poets might disagree with me. The form, I think, just follows you
around and one day it reappears and you are in it again.

The first poem in this book, ‘Speaking with my grandmothers’, was
written more than ten years ago, in response to Roger Robinson’s
commission for Writing Wellington: twenty years of Victoria
University writing fellows. It’s about my maternal ancestors and it
alerted me to the idea that some day I would explore my relationship
with other of my grandparents through poetry. Not that I ever knew
them on my father’s side. But when finally I stood in front of the
house where my paternal grandmother had grown up in Bandon,
County Cork, the idea came flooding back.

That year I was living in the south of France where I was the
Katherine Mansfield Fellow. I had in my possession old letters
that my father’s parents and other relatives had written to him,
after he immigrated to New Zealand. The second sequence of
grandparent poems, ‘Last Letters’, comprises ‘found’ works, based
on these letters. I imagine they were written by private people and
I had to ask myself whether this is what they would have wanted.
Yet this is the only voice I have ever heard or known of a family
that has, essentially, disappeared. In that sense, their words have
become mine.

When I returned to Menton, I found myself writing poems again with
great speed and energy — much as in Marseilles, in 1906, Auguste
Rodin drew the Cambodian dancers I describe in the poem ‘Rodin’s
dancers’. (I saw this sequence, which is exhibited from time to time
at Musée Rodin in Paris.)

In the three years that have passed since then, I have held the Creative
New Zealand Michael King Fellowship, which has allowed me time to
work on these early drafts and some new poems too. I am grateful for
the fellowships I have held and the freedom they have offered. My
thanks go to Nicola Legat, Pieta Brenton, Leonie Freeman, and Claire
Gummer whose inspired suggestions were invaluable.
fiona kidman
Wellington, 2009

About the illustrations
Most of the images throughout the book are of fabrics from Victorian
Gilt antique collectibles, Auckland. The publisher is very grateful for
the generous loan of these items and also for the loan of the cameo
brooch on page 37.
The endpapers and page 59 are from the Alexander Turnbull
Library collection. Endpapers: Mansfield, Katherine 1888–1923
(Collector) [Embroidered linen bookcover, 1907–1908] Reference
No.B-180-003; page 59: Katherine Mansfield at her work table,
Villa Isola Bella, Menton, France 1920 Reference No.1/2-011917-F.
The photograph on page 101 is a photo of the author’s great aunts:
‘Poll on the left, Sal on the right, my grandparents in the centre,
and their driver on their “grand day out” sitting in the front.’ 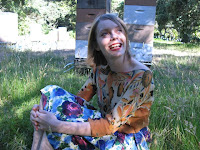 About the designer (pic left by Deb Smith):
As a small girl Pieta Brenton's favourite part of the week was always visiting ‘Novel’ (her local book store) with her mother and helping her to pick out a new book, her preference often secretly based on its cover!

After leaving school she studied sculpture at Elam and went on to complete her studies in graphic design at Unitec in Auckland. She was thrilled to graduate with a job at the prestigious boutique studio Inhouse Design, where she worked for three years. She currently works in book heaven as head designer at Random House, but will be moving on soon to pursue her dream of being a freelance book designer.
Posted by Beattie's Book Blog at 12:31 pm