“Whatever happened to feminism?” 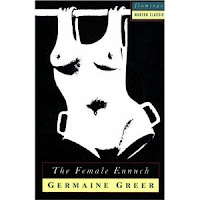 It’s been 40 years since Germaine Greer published “The Female Eunuch” and in the media, journalists and writers have been taking stock.
Both in New Zealand and overseas there have been numerous newspaper and magazine features, TV and radio programmes as well as a multiplicity of posts in the blogosphere.
Throughout the musings on the feminist movement several questions crop up again and again.
“Whatever happened to feminism?”; “Is it still relevant?”; “What did it achieve?”

On Media7 this week Russell Brown seeks answers to these questions and more with Professor Marilyn Waring (former National M.P., political economist and author), Gemma Gracewood (Film & TV producer and broadcaster) and Sophia Blair (National Women’s Rights Officer of NZUSA).
All three are feminists but they each represent different generations of New Zealand women -- so their different perspectives on the subject are sure to produce a lively debate.

Media7’s Sarah Daniell has also been looking at the career of the feminist movement.
She’s produced a thoughtful video report which covers the history and re-visits the era of “Thursday” – the magazine for the modern women – as it was billed when Marcia Russell launched it.
Marcia Russell, ironic and iconic feminist of the “stirring” era of the feminist press reveals some amusing insights from those halcyon days.

The show is broadcast at 9.10pm on Thursday on TVNZ 7 and is replayed several times during the week. Media7 is broadcast both on FreeView and on Sky Channel 97. It is also available on demand from TVNZ’s website, can be downloaded as a podcast  http://tvnz.co.nz/media7/podcasts-2757335  and is available on YouTube.
There is also a Media7 FaceBook page for viewers to place their feedback and to learn more about the show and you can follow us on twitter @media7nz.
Posted by Beattie's Book Blog at 2:43 pm