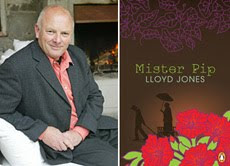 Minister for Arts, Culture and Heritage Chris Finlayson will launch the Bougainville library project and websitetonight Tuesday 30 March at a function at  6pm-7.30pm at the Begonia House in the Wellington Botanic Gardens.

The Bougainville Library Trust was established by writer Lloyd Jones, author of Mister Pip, (pic left), a novel set on the island of Bougainville during the crisis in the 1990s.

In 2007, Mister Pip gained international acclaim winning the Commonwealth Writers’ Prize Best Book Award and being short-listed for the Man Booker Prize. It also drew international attention to the ten year long crisis in Bougainville.
In the late 1990s the New Zealand government initiated peace talks.  The introduction of peacekeepers brought an end to the hostilities on Bougainville.

“Building a library and cultural centre is an important part of the island’s future.  A new library will address a younger generation and do much to rebuild the community’s cultural capital and confidence,” says Lloyd Jones.
The Trust is working with Volunteer Service Abroad (VSA) and the Bougainville Heritage Foundation, which is based in Arawa (Bougainville’s capital), to build and stock a library and cultural centre.

A casualty of the Bougainville crisis was the loss of meeting places and books.  A community library will provide a home for both.  It will be a place to tell stories and read the stories of others.

Already a number of Australian and New Zealand publishers have donated $30,000 worth of books for the library.
www.bougainvillelibrary.org.nz
Posted by Beattie's Book Blog at 1:18 pm