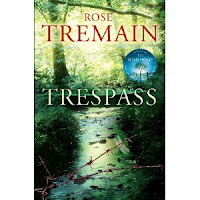 For her scope and style, Rose Tremain has to be one of the finest writers working in the UK right now. I’ve read and loved several of her books and no two are the same. Some are historical, others very much of the moment. Consequently each new novel is unexpected and this unpredictability only makes her work all the more enthralling.

Trespass is set in the south of France, in the harsh, mountainous landscape of the Cervennes and is peopled by mostly dislikeable characters. You aren’t driven through its pages by a concern for what will happen to any of them but by the sheer elegance of Tremain’s writing.
Audrun Lunel lives in an ugly bungalow on the boundary of her brother Aramon’s property, the crumbling Mas Lunel. He is a filthy wreck of a man who believes his salvation lies in selling the family home to one of the wealthy foreign people who are invading the area. At the same time London antique dealer Anthony Verey is contemplating his future. With his business failing and the glitter of his life fading fast he decides to escape to the Cevannes to live near the only person he cares about, his garden designer sister Veronica who has a seemingly idyllic life there with her artist partner Kitty. But when the new and the old worlds collide there is inevitably tension and ruin.

Trespass is about people crippled by their pasts and about the things they choose to put their love into. For Audrun it’s the land that’s the one thing she truly trusts in after years of being mistreated at the hands of her family, for Anthony Verey it’s his possessions, the relics of the past he refers to as his beloveds.
This is quite a slim volume really. Other writers might have needed three times the pages to accommodate its small vignettes and sweeping themes, to tangle together the threads of these diverse characters lives, their cruelties and their yearnings. But Tremain’s writing is an exercise in restraint, taut and poised. She has an eye for details that matter.
Dark and brooding, with thankfully some redemption, its publishers bill Trespass as a thriller but like all of Tremain’s books it defies being described quite so neatly.

Footnote:
Nicky Pellegrino, in addition to being a succcesful author of popular fiction, (her former title The Italian Wedding was published in May 2009 while herlatest, Recipe for Life is published by Orion this week), is also the Books Editor of the Herald on Sunday where the above piece was first published on 28 March.
Posted by Beattie's Book Blog at 10:19 am