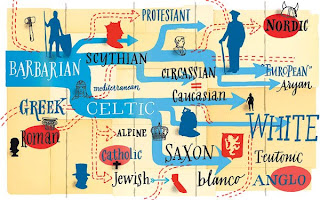 Nell Irvin Painter’s title, “The History of White People,” is a provocation in several ways: it’s monumental in sweep, and its absurd grandiosity should call to mind the fact that writing a “History of Black People” might seem perfectly reasonable to white people. But the title is literally accurate, because the book traces characterizations of the lighter-skinned people we call white today, starting with the ancient Scythians. For those who have not yet registered how much these characterizations have changed, let me assure you that sensory observation was not the basis of racial nomenclature.

Some ancient descriptions did note color, as when the ancient Greeks recognized that their “barbaric” northern neighbors, Scythians and Celts, had lighter skin than Greeks considered normal. Most ancient peoples defined population differences culturally, not physically, and often regarded lighter people as less civilized. Centuries later, European travel writers regarded the light-skinned Circassians, a k a Caucasians, as people best fit only for slavery, yet at the same time labeled Circassian slave women the epitome of beauty. Exoticizing and sexualizing women of allegedly inferior “races” has a long and continuous history in racial thought; it’s just that today they are usually darker-skinned women.

“Whiteness studies” have so proliferated in the last two decades that historians might be forgiven a yawn in response to being told that racial divisions are fundamentally arbitrary, and that deciding who is white has been not only fluid but also heavily influenced by class and culture. In some Latin American countries, for example, the term blanquearse, to bleach oneself, is used to mean moving upward in class status. But this concept — the social and cultural construction of race over time — remains harder for many people to understand than, say, the notion that gender is a social and cultural construction, unlike sex. As recently as 10 years ago, some of my undergraduate students at the University of Wisconsin heard my explanations of critical race theory as a denial of observable physical differences.

The full review at NYT.
Posted by Beattie's Book Blog at 8:34 pm