Earthscan makes it a hat-trick 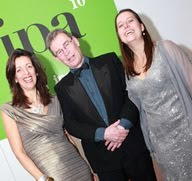 22.03.10 | Catherine Neilan in The Bookseller
Earthscan scored a treble at this year's Independent Publishers Award, picking up three of the gongs including the top prize, the Independent Publisher of the Year.
The publisher was also awarded International Achievement of the Year and Lightning Source Academic & Professional Publisher of the Year. It follows Alastair Sawday Publishing, which last year also won three, including the overall prize.
At tonight's (20th March) gala dinner, the judges commended Earthscan for its "sound business sense, its passionate commitment to its environmental-based publishing, and its bold but carefully calculated international ambitions". The judges noted 2009's performance, which resulted in "striking increases in sales and profits while some other publishers struggled", describing the firm as "a yardstick by which all independents might measure themselves".

But Earthscan was not the only winner of the evening. New member John Blake Publishing picked up Trade Publisher of the Year, for its "string of bestsellers over the last year, and its ability to move faster than any other publisher in responding to market demands and filling gaps".
The judges said the company had "pioneered a kind of publishing that bigger companies are now trying to mimic".

The Salariya Book Company picked up Children's Publisher of the Year, having been shortlisted last year. Edinburgh-based Bright Red Publishing won Education Publisher of the Year, having set up just two years ago - something which the judges noted positively.
Specialist Consumer Publisher of the Year went to Osprey, which was applauded for its "content-rich websites" and its "sound electronic sales and marketing strategies". Search Press won Nielsen Innovation of the Year award for a new series of art instruction books helping painters to trace base images onto paper.
Green Books picked up the Environmental Award, for which there had been no shortlist, highlighting the firm's "commitment to raising awareness of environmental issues for more than two decades". The Diversity Award was won by Trentham Books, while the Digital Award went to another of last year's shortlisters - Top That! Publishing.

John Hampson, who left the Arts Council earlier this year, was given the GBS Services to Independent Publishers Award for being "an incredible supporter of independent publishing, always displaying fantastic vision and knowledge of the industry".
Posted by Beattie's Book Blog at 6:28 am