The Bargain Book Business By the Numbers
By Larry May, director of The Spring Book Show

This story is not so dissimilar from what many of you who are in the book industry are facing today.  The book industry which once allowed us to fuel our passions in a fertile and robust marketplace has now become a game of survival. In the early '90s, I remember having a conversation with the President of the American Booksellers Association (ABA) and he told me that the ABA's membership had peaked somewhere between 4,500-5,000 members. Today, ABA membership hovers somewhere around 1,700. What happened? Well, the story is well known: "Big Box" chain retailers, online bookselling, and now e-books have all eroded the independent book retailing business.

Will E-books Kill the Remainder Book Business?
By Edward Nawotka 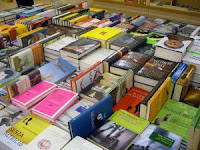 In today's lead story, Larry May, director of the Spring Book Show, explains the ins-and-outs of the bargain book business, a lucrative secondary market that most publisher would rather not acknowledge.

The business deals in hurts, returns, overruns and books that have been published but gone unsold. But as the industry moves closer and closer to digital distribution of books - maybe not this year, maybe not the next, but soon - will this ultimately choke off the supply of titles that feed the remainder dealers?
(read on ...)

Posted by Beattie's Book Blog at 6:45 am