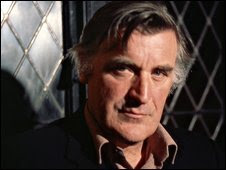 Ted Hughes was appointed poet laureate in 1984
Poet Ted Hughes is to be recognised with a permanent memorial in Poets' Corner in Westminster Abbey.

His name will feature alongside some of the country's best-loved poets including T.S. Eliot, William Blake and William Wordsworth.
The former poet laureate, who died in 1998, was accepted for the honour by the Dean of Westminster, Dr John Hall.
Dr Hall said it was "right" that Hughes should be remembered for hundreds of years to come.

Hughes was born in Mytholmroyd, in West Yorkshire, in 1930.
His first book of poems, Hawk in the Rain, won critical acclaim upon its release in 1957.
He was awarded the OBE in 1977 and was made poet laureate in 1984. 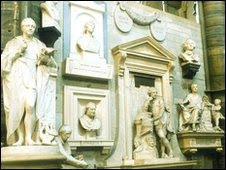 Hughes moved to North Tawton in Devon in the 1960s and remained in the county until his death from cancer.
Fellow poet Seamus Heaney had spearheaded the campaign for Hughes to be remembered in Poets' Corner.