Every couple of weeks I get to talk to Jim Mora on his Afternoons programme on Radio New Zealand National about my latest reading.
Today I talked about NINE DRAGONS by Michael Connelly (Allen & Unwin) and NEVER LOOK AWAY byLinwood Barclay (Orion).

Let's start with NINE DRAGONS. This is I think Connelly's 15th title featuring Harry Bosch.
Bosch is one of those superbly drawn characters that people the very best fiction in this genre. Regular readers like me tend to become rather devoted to them, almost addicted I guess.Other examples are Lee Child's Jack Reacher, Sara Paretsky's V.I Warshawski, Sue Grafton's Kinsey Millhone, Ian Rankin's John Rebus (now sadly retired), and P.D.James' Adam Dalgleish. There are many others.
I sometimes think it would be a great idea if their creators were to write a biography of their characters.
We know a lot about Harry Bosch but NINE DRAGONS may be the most personal of the Bosch stories since THE LAST COYOTE in which he investigated the death of his prostitute mother which happened back in 1961 when Bosch was eleven years old.
In this latest title (published October 2009) Bosch's daughter goes missing in Hong Kong where she lives with her mother, Bosch's ex-wife. Another page turner with some surprising twists along the way. I couldn't put it down. 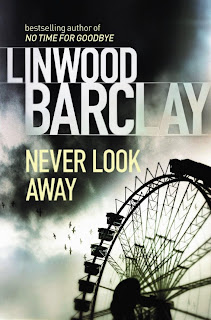 NEVER LOOK AWAY by Linwood Barclay is totally different in that Barclay's stories are stand alone with each novel featuring a new set of characters. Someone once described Barclay as "the master of domsetic paranoia" and I reckon that description isspot on.

David Harwood and his wife Jan go to Five Mountains amusement park for a day of fun and relaxation with their four year old son Ethan.
Just as they get through the gate Jan realises she has left something in the car and so heads back to get it. That is the last time she is seen.
David Harwood is a journalist and he sets out to solve the mystery of Jan's disappearance but before long the police have him as their number one suspect.
Another unputdownable story. The suspense was almost too much to bear at times.
I recommend both of these titles, especially good for long plane trips or for switching off over the coming holiday weekend.

These reviews I did with Jim are currently on the Radio NZ website, not sure how long they leave them there. Go to Jim's programme website and then click on Critical Mass. under today's date - 30 March
Posted by Beattie's Book Blog at 2:24 pm