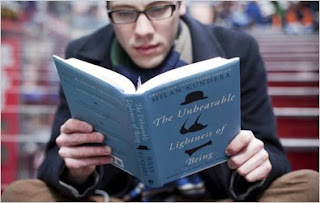 Bindu Wiles was on a Q train in Brooklyn this month when she spotted a woman reading a book whose cover had an arresting black silhouette of a girl’s head set against a bright orange background.
Ms. Wiles noticed that the woman looked about her age, 45, and was carrying a yoga mat, so she figured that they were like-minded and leaned in to catch the title: “Little Bee,” a novel by Chris Cleave. Ms. Wiles, a graduate student in nonfiction writing at Sarah Lawrence College, tapped a note into her iPhone and bought the book later that week.

Such encounters are becoming increasingly difficult. With a growing number of people turning to Kindles and other electronic readers, and with the Apple iPad arriving on Saturday, it is not always possible to see what others are reading or to project your own literary tastes.
You can’t tell a book by its cover if it doesn’t have one.

“There’s something about having a beautiful book that looks intellectually weighty and yummy,” said Ms. Wiles, who recalled that when she was rereading “Anna Karenina” recently, she liked that people could see the cover on the subway. “You feel kind of proud to be reading it.” With a Kindle or Nook, she said, “people would never know.”

Among other changes heralded by the e-book era, digital editions are bumping book covers off the subway, the coffee table and the beach. That is a loss for publishers and authors, who enjoy some free advertising for their books in printed form: if you notice the jackets on the books people are reading on a plane or in the park, you might decide to check out “The Girl With the Dragon Tattoo” or “The Help,” too.

“So often when you’re thinking of a book, you remember its cover,” said Jeffrey C. Alexander, professor of cultural sociology at Yale. “It’s a way of drawing people through the visual into reading.”

In the bookstore, where a majority of sales still take place, covers play a crucial role. “If you have already passed that hurdle of having a customer be attracted to the cover, and then they pick up the book,” said Patricia Bostelman, vice president for marketing at Barnes & Noble, “an enormous battle has been won.”

But it’s a victory that will be harder to eke out if no one can tell whether you’re reading “War and Peace” or “Diamonds and Desire.”
The rest of Motoko Rich's story here.
Posted by Beattie's Book Blog at 8:55 pm