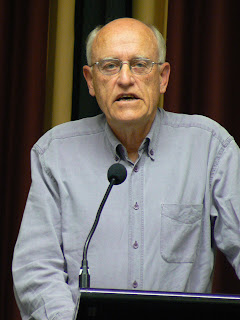 In May 2005, the author Karl Stead thought his career was over. He had suffered a severe stroke and for many weeks was unable to read or write.
Nevertheless, on Friday night, Stead, a modest 77-year-old widely recognised as New Zealand’s leading man of letters, won £25,000 as the first victor of the Sunday Times EFG Private Bank Short Story award.

Award director Cathy Galvin said: "The judges were unanimous - the winning story is haunting and beautifully crafted."
His entry has some resonance with his own health problems. Stead said the title, Last Season’s Man, is ironic because five years ago he felt that he was “last season’s man” after his stroke. What he initially thought was a bad migraine turned out to be much worse. In hospital a doctor held up a card and asked him what it said. “I couldn’t do it and I was appalled,” Stead said.
He described the effect as “like dyslexia”, with all the letters and words jumbled up. “The whole experience was so very scary — not least because you know you are not safe any more. You know it could happen again.”

Fortunately, Stead — who has written 11 novels, 15 books of poetry and two collections of short stories — has regained all his faculties, except one. Oddly, he can no longer write his own signature so he has created another.
After his illness, Stead began to write again by composing poetry in his head. Aptly enough, his first poem was called S-T-R-O-K-E.

His winning story is set in Croatia and recounts how a young writer criticises a respected older one and damages his reputation. It beat off competition on the shortlist from the British writers Will Cohu Joe Dunthorne and Adam Marek and from the bestselling American novelist David Vann.

Link here to The Sunday Times for the full piece.
Posted by Beattie's Book Blog at 7:55 pm