PAUL AND ME
53 Years of Adventures and Misadventures With My Pal Paul Newman
By A. E. Hotchner
Illustrated. 234 pages. Nan A. Talese/Doubleday. $26.95.

THE BEST OF FRIENDS
Martha and Me
By Mariana Pasternak
Illustrated. 398 pages. Harper. $25.99. 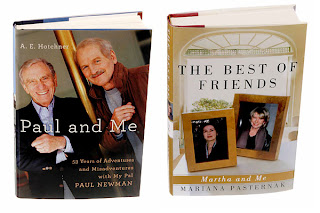 When Paul Newman of Westport, Conn., had the idea of marketing his own brand of salad dressing, he recruited Martha Stewart, also of Westport, to conduct a taste-off and make sure people liked the stuff. At the time these two Westport eminences had little else in common. Now they share the dubious distinction of being the subjects of “and Me” books, each written by a self-proclaimed dear friend and Westport neighbor.

In the short and sweet “Paul and Me” Newman has been duly lauded by A. E. Hotchner, his longtime crony (and salad-dressing-business partner). This tribute to Newman’s fun-loving spirit and fiscal generosity could not be more unlike “The Best of Friends,” Mariana Pasternak’s portrait of a grasping, clueless and chintzy Martha Stewart — who, Ms. Pasternak must sadly report, is not nearly as chic, discerning, desirable and patrician as Ms. Pasternak believes herself to be.

Ms. Pasternak, who stopped hearing from her beloved Martha around the time she gave courtroom testimony that would help send Ms. Stewart to prison, would have had to shed fewer crocodile tears over the loss of this treasured friendship if she had simply called her book “Martha, Watch Your Back.” Speaking of crocodile, Ms. Pasternak winds up expressing even more affection for a special red Hermès handbag (“How I loved that bag!”) than she does for the woman whose coattails she rode for more than 20 years.

Ms. Pasternak’s readers are likely to have no interest whatsoever in the story of her Romanian girlhood, which was plagued by Communist persecution but rooted in snobbish distinctions between peasantry and intelligentsia. She immigrated to the United States in 1979 with one mere Hermès scarf of her grandmother’s but a very large sense of her own entitlement. By 1981 she had become engaged to a doctor and moved with him to Westport, where a predatory blond neighbor — Ms. Stewart — dropped in unexpectedly one day. The visit, Ms. Pasternak writes, was prompted by Ms. Stewart’s desire to check out the new unmarried man in town.
Read Janet Maslin's full review at NYT.
Posted by Beattie's Book Blog at 6:38 am