Mary Egan resigned from Pindar NZ Ltd recently so that she could give care and comfort to her ailing husband, Gerard Reid.  The pair have been partners in business since 1978 when they managed a bookshop together, until Gerard became executive director of the Book Publishers Association of New Zealand in 1979.

Mary had been a librarian.  After the bookshop and a break to bring up children she began typesetting manuscripts for publishers and developed her book design skills. When Gerard left the association, after an ill-fated economy drive, he and Mary specialised in book design for publishers, initially for New Zealand, then for Australia and the UK.  They became an international force in the book industry.

The Egan-Reid company was sold in 2007 to Pindar, a print technology and software company based in the UK, where their record of innovations was introduced to the Pindar Group.

I first met Mary when she was an applicant for library school and I was a member of the selection panel.  We rubbed shoulders again when I published Wynne Colgan’s history of the Auckland Public Libraries, where she was a staffer.

Gerard and I met when he was also an applicant, to succeed me as executive officer at the Book Publishers Association of NZ.  He was the chosen applicant and the handover of duties was amicable and easy.

Once out of association management, Gerard had to make a fresh start, in which change Mary became the cornerstone on which Egan-Reid NZ Ltd was founded.

Their success is legendary in the history of book publishing in New Zealand and, as seems unavoidable, it was the male who received most of the public esteem, which was reasonable because of his inventiveness with new publishing processes. 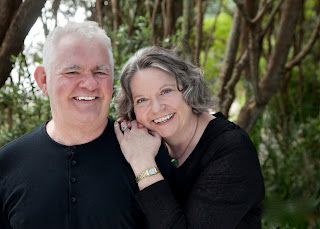 Mary and Gerard (photo above) worked together, alongside and apart, a virtually miraculous couple who built up a quality team of young typographers, designers and book-production specialists.

Mary had been running the Pindar NZ office in Gerard’s absence, continuing the corporate role in publishing services that made them so valuable to their owners, clients and staff. Together they mastered computing innovations and printing technologies, typography, design and the overall management of making books, including e-books. A natural leader, Mary trained her specialist staff to cutting-edge excellence, with staff loyalty at an enviable level, driven by the single objective of excellence.

Driven, as she is at present, to provide full-time care for Gerard she maintains her own standards of excellence and loving care.

I am sure that the publishing world has not seen the last of Mary Egan.

Footnote:
Ray Richards is a veteran New Zealand book trade personality who has been in the book trade for seven decades first as publisher with AH & Aw Reed and then as literary agent.
Now 88 years of age Ray remains active as an agent and his passion for New Zealand writing is undiminished.