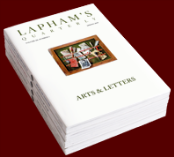 The Spring 2010 edition of Lapham's Quarterly features a chart that reveals how much individual authors earned at their day jobs over the last few centuries.

Adjusted for inflation, the chart helps aspiring writers find their place on the economic spectrum of starving artists. To help you appreciate the chart more, GalleyCat Reviews has stacked the writers' salaries against literary criticism about their work.

In 2008, novelist Zadie Smith reviewed Franz Kafka--an author who topped the salary list, earning $40,000 a year as the chief legal secretary of the Workmen's Accident Insurance Institute. Here's an excerpt: "there is a sense in which Kafka's Jewish question ('What have I in common with Jews?') has become everybody's question, Jewish alienation the template for all our doubts.[16] What is Muslimness? What is Femaleness? What is Polishness? What is Englishness? These days we all find our anterior legs flailing before us. We're all insects, all Ungeziefer, now."

In 1997, Joyce Carol Oates reviewed Charlotte Bronte-- a novelist who earned a bit more than $1,800 a year as a governess in 1839. A sample: "Why does Jane Eyre retain its appeal after so many decades, and so many intervening novels of virginal young heroines, Byronic moody mysterious elder men, and melodramatic disclosures? One answer is, simply, the quality of Jane's and Rochester's characters. They are believable. They are intelligent, yet emotional, superior beings who are human, even flawed; as the 19th-century reader would have discerned, they are models for us all."

Finally, Liam Rector reviewed the poetry of T.S. Eliot, who earned between $18,000 and $32,000 as a clerk at Lloyds Bank. Here's an excerpt: "Once upon a time there no doubt was what Delmore Schwartz called the literary dictatorship of T. S. Eliot, a dictatorship whose orthodoxies entranced, captivated, defined, refined, and terrified his children. My sense now is that the Eliot juggernaut in America has been overtaken, in the land of the living, by the influence of Wallace Stevens ... Eliot's orthodoxies overturned and by now in many quarters almost ignored, it's a perfect time to be reading and inheriting Eliot without the terror."
Meehan, whose biography of expat jazz pianist Mike Nock is due out this year from VUP, plans to perform the album in October. Manhire says he might go along and read in his ''po-faced, sub-Sam Hunt way'' then let the band do the ''proper'' versions.

This interesting piece from Galley Cat.
Posted by Beattie's Book Blog at 9:28 am